A brain injury can significantly affect a person's ability to make good choices and see clearly when it comes to relationships and intimacy. Kelli Gary talks shares her experience.

Actually, this is my second marriage. And I actually had what was called sexual dysfunction after my brain injury. Part of my brain that was injured was partly the reason for that. I actually led a pretty promiscuous lifestyle, and because I looked okay to a lot of people, and I had enough sense to be able to hide --you know--or compensate for things, then people may not have seen what was wrong with me, particularly--you know--guys that maybe I had never met in the past or didn't know me from the past. I was able to get away with-- I was--I mean, I never did have much of a problem dating guys. I had a healthy dating life in the past, and so that was a problem for me. That was a problem. It interfered with my studies, being--you know--because a guy made me feel wanted. It made me feel normal. Being with a guy made me feel like I was just the way I was before my injury. You know--I didn't have any problems then. So that was a problem for me. Part of the way I resolved that was through my faith, actually. Just focusing more on--you know--my spiritualness and knowing that part of the things that I was doing wasn't necessarily what was in God's plan for me. And starting to realize that--you know--everybody's not going to have your best interests at heart. And seeing that from a--even a painful perspective, because I have had some very, very painful relationships afterward. You know--things I might have picked up on because of lack of awareness or lack of problem-solving or just wanting to be needed and loved--you know--because of my insecurities now. That--umm--was a problem. But as time went on, more through, even, just my experience and being able to have my mother as some support, even though she didn't like some of the things that I was doing or the men that I was dating or who I was going out with--you know--she was supportive. She allowed me to go out with some of these guys and see for myself--you know--how they were. And that helped. My first marriage actually occurred after my graduate--after graduate school. And it ended rather abruptly and, actually, rather nicely. My ex-husband and I are still good friends. We just decided that we did it too quickly and it's not what we really wanted. And so--and part of the problems was because of my brain injury as well. Like, he complained about me being too tired and sleeping too much and doing this and doing that, being too slow at certain things. And I--you know--was attracted to him because he was a man of the faith and --you know--that's what I thought I needed, to be with a man of the faith. And so, umm, that ended. And my relationships started to--like, the type of people that I went out with and the frequency of my dating pattern started to decrease. I started to look inward, focus more on me. I started to learn how to go to the movies on my own and enjoy being by myself. And then the more and more I started to focus on me and doing stuff for others instead of taking my focus off of being with another person to validate me. That's when I started to get better, and actually that prepared me for my next marriage.
Posted on BrainLine March 16, 2010. 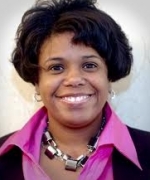