[Dr. Michael Roy] The patient can either be seated, and he has a game-like controller in his hands. So he can control as he either walks or drives through the environment, and the direction that he goes in and so forth. He can—with his headset—he can also see things to his left or right or even turn around and see what's behind him. Right now, he is seated. But he could be standing, and we actually have an alternate controller that's on top of a M16 replica rifle. So it's authentic size and weight, and the controller is right on top of the gun. So if somebody wants to feel that while they're on patrol they have that rifle in their hand, as some have wanted to— that's an option. He is on a vibration platform, which conveys the feel of the rumble of the Humvee when he is driving the Humvee through the environment, as well as the explosions, are transmitted through that. Over here, there is a smell machine, and you can see the little bottles full of pellets. We just put a pellet in, put a fan to heat it up, and kind of blow the smell over him. Again, some positive and negative smells that can be introduced at appropriate times. Here you see the therapist is really using a total of 3 computer screens in this set-up. So there are—on the far right—he is seeing a large screen representation of what the patient is seeing through their headset. So as the patient moves, that view changes, as well. So it's just exactly what the patient sees. On the middle screen, there is a smaller picture of what the patient is seeing. Then all around it—you can't really pick it up here— but there are a whole bunch of different tabs that the therapist can click on, which introduce different things— call to prayer, dogs barking, people talking in either English or Arabic. Vehicles can come in—ambulance or Humvee, a tank. Air vehicles—as to helicopters, A-18 Warthogs—can fly over. They can circle and land—the helicopters can. You can change the weather, the time of day—all kinds of different features— machine gun fire, IEDs, RPGs. They can be to the left, to the right. You can change the level of graphics from either minimal to pretty high level where the passenger in the Humvee may be shot. You can see them bleeding and so forth from gun wounds. Again, all of this can be individualized, depending on what that patient's experience is and what you think they're ready for at that point in time. You can see they have high-quality headphones on for the sound. On the furthest screen over, which works with this tower here that's underneath the table—there we're monitoring physiology. So blood pressure, heart rate, how much they're sweating, breathing rate, and eye blink throughout. A lot of different things that we can introduce in the virtual environment. Now this is what the functional MRI is showing us. In this case, orange is our patients before treatment, and the light blue is after treatment. So I'll walk you through this here. The baseline is right in the middle here. If we look at anterior cingulate gyrus— that's part of the frontal lobes. That's where emotions are mediated. and you can see that there is a very sharp decrease in oxygenation in that area compared to other parts of the brain. That's decreased activation that occurs in response to the stimuli that we've presented. So this—we think—is associated with the avoidance, numbing features of PTSD. All these subjects here have PTSD. So you can see again a very sharp decrease there. That returns much closer to normal. It doesn't totally go away, but significantly improves. You can see these bars representing confidence intervals there. So that's very significant improvement in the level of inhibition that we see there. In the amygdala—which we know is associated with more the hypervigilance, more easily startled features of PTSD— you can see there is significant activation that occurs before treatment there. It actually reverses to some extent—resolves—with treatment. So very significant change there, as well. The subcallosal gyrus is basically around where the hippocampus is, which is very important for memories. You can see there is tremendous activation with the presentation of these stimuli before treatment. Again, it reverses—really significantly improves—after treatment. Those are all pretty remarkable changes— evidence of the impact of the treatment on the patient. I'll show you one more here. The stimuli that we use in the scanner— we actually present some very positive things like a baby seal playing in the snow—some negative things—a motor vehicle accident with a victim, a pit bull opening its jaws, a snake bearing its fangs. So those are all pictures that have been shown to have very strong emotional charge— emotional responses—to them. Then we have some neutral images— things—pictures that don't really elicit a strong emotional reaction. Here what we've done is to tease out those things. I'll just have you focus on the amygdala here. So if you look at before treatment, the negative stimuli elicited a very strong reaction here; whereas neutral stimuli—the confidence interval overlapped zero. So no significant response to the neutral stimuli. So it's really the negative ones where we get the strong response and, in fact, that's where you are seeing the big change with treatment. So they are no longer reacting that strongly to the negative stimuli now; whereas their response to neutral stimuli has not really significantly changed. On the other hand, if you look at part of the frontal lobe here, again you see that inhibition. It occurs a little more—a pretty similar amount— whether it's negative or neutral stimuli. But the change that occurred is really in response to the negative stimuli, once again—not so much the neutral.
Posted on BrainLine May 28, 2013.

Michael Roy, MD, Col. (Ret.) is professor of Medicine and director of the Division of Military Internal Medicine at Uniformed Services University and director of Recruitment for USU's Center for Neuroscience and Regenerative Medicine. 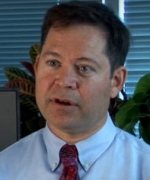