Baseline Testing in the Military

Dr. Jack Tsao talks about the debate around computerized baseline testing: is it useful, is it comprehensive, and when is the appropriate time for retesting.

So at this time, the only pre-deployment baseline neurocognitive testing that occurs is prior to deployment to Afghanistan, and it's required for the sailors and marines who go what we call "boots on the ground." There is much debate as to how useful baseline testing is and how to compare post-injury tests back to the baseline, and so that's one of our other projects that we're working on is to look at some of the post-injury tests and to examine how would it—how would the tests be interpreted if you didn't have a baseline? For example, if you just used your group norms of performance, versus if you had an individualized baseline, would that—does that improve the ability to use the post-injury data, or does it only add a little bit, or does it add a huge amount, meaning that you absolutely have to have a baseline for everyone. And we also know that reaction time, for example, changes as people get older, so people get slower. So, unfortunately, [laughs] those are known changes, and so the question is, if you were to baseline test everyone, what's the appropriate time to retest them? And at what time does your performance actually change? Is there an effective—say, if you're not sleeping well, for example, in terms of your performance, or if you have something else going on in your life that's affecting your ability to concentrate. So there's a lot of questions that are still unanswered regarding baseline testing. And from the sports research that's been done, they showed that if you—even after you've come back to your baseline performance on a computerized test— doing an actual face-to-face testing with a neuropsychologist, there are still other cognitive deficits, even though subtle, that were still present. So, again, there's a lot yet to be learned about the use of neurocognitive testing.
Posted on BrainLine February 4, 2014.

Jack Tsao, MD, DPhil, CAPT, MC, USN is a United States Navy neurologist and the director of Traumatic Brain Injury Programs for the US Navy Bureau of Medicine and Surgery, professor of Neurology at the Uniformed Services University of the Health Sciences, and fellow of the American Academy of Neurology. 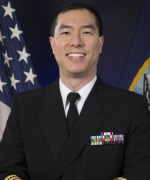