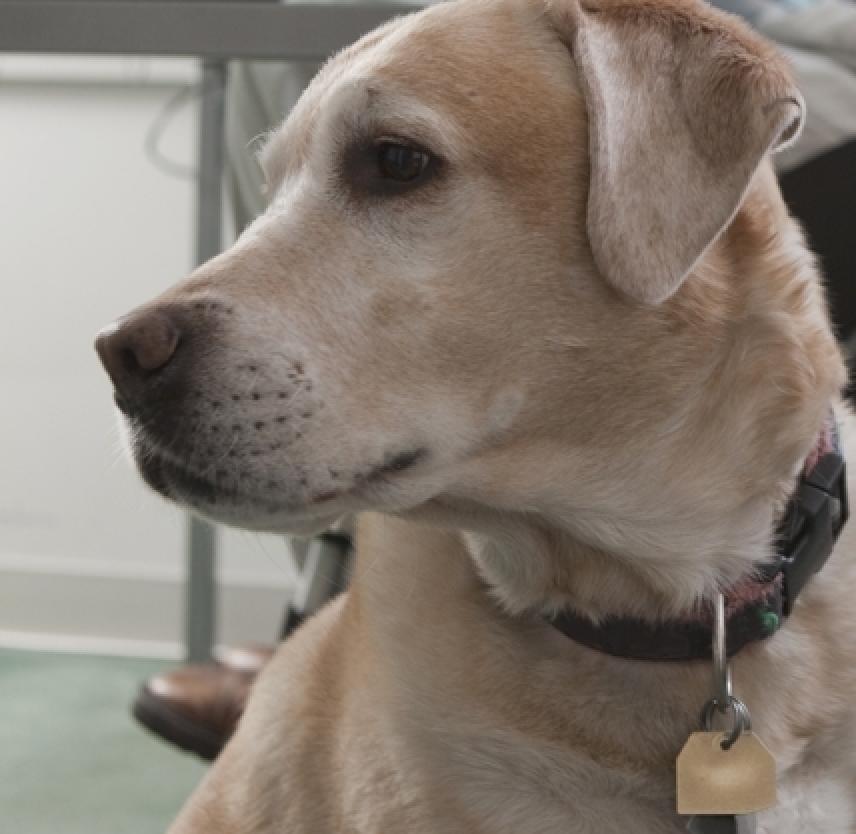 Luis Carlos Montalvan is a decorated war veteran with post-traumatic stress disorder (PTSD) and a traumatic brain injury (TBI) sustained while serving two tours in Iraq. I spoke with Montalvan at the Pentagon library Nov. 30 where he shared perspectives on PTSD and TBI and his special relationship with Tuesday, his service dog. From that conversation, here’s what I imagined Tuesday might say if he could talk.

My name is Tuesday. I’m currently resting at the feet of former Army Capt. Luis Carlos Montalvan, who’s talking about two subjects that most interest him — bringing veterans’ struggles with PTSD and TBI to the forefront, and me.

Let’s be clear. I’m not really resting. I’m a highly-trained, low-tech asset listening to Montalvan’s breathing, words, inflection and tuning in to any changes in perspiration or scent that might indicate an oncoming anxiety attack. My back is touching his leg. I’ll likely know before he does if he starts to feel unwell and alert him and others. I’ve often heard him say that I’m his litmus test; he looks to me to gauge how he’s feeling.

Getting him here attests to my status and skills. Unlike therapy dogs, I have public access, which includes permission to enter the Pentagon. In its maze of corridors and people, I’m sensitive to Montalvan’s concerns about crowds, so I listen for his “block” command and block out some space between him and others. And though I love people, I keep my focus on assisting his mobility and balance, both of which were compromised as a result of his TBI.

In the Pentagon, as in other venues, everyone wants to approach me until they see the sign on my harness, “Do Not Pet.” If we’re in transit, attention to me could be distracting and potentially dangerous to Montalvan; seeing that sign, most people respect it. They get that I’m doing a job. But, if we’re stationary, Montalvan is comfortable with letting those special human-dog greetings take place.

When we’re at home, a nudge from my wet nose reminds Montalvan to take his medicines for PTSD and TBI. Coping with these issues brought him to me in 2008 when he responded to the non-profit East Coast Assistance Dogs’ public notice of service dogs available for pairing with veterans. Our fate was sealed the day he asked me for a kiss and I offered a reluctant lick. My reserve was familiar to him and through that connection, our bond was formed. Since then, we’ve been inseparable.

Through speaking engagements and media interviews, we advocate for veterans and families coping with the effects of PTSD and TBI. Montalvan shares his insights into living with these concerns and how I help facilitate his healing process as captured in his book, “Until Tuesday.” He recognizes that many veterans suffer silently with post-war effects and struggle with getting help. He wants people with these challenges to know the positive life they can have by reaching out for help, seeking treatment and committing to a journey of healing.

According to Montalvan, service dogs can play a critical role in that journey along with medical care. Further, he says an investment in service dogs for certain types of care and mobility needs gives veterans incentives to get out of bed, leave the house, drink less and be more engaged with less stress; all of which can enable them to pursue interests, education and dreams.

We’re both awaiting results of the Department of Veterans Affairs’ (VA) proposed rule and Congressionally-mandated study that would broaden and clarify benefits to veterans in need of service dogs and determine if VA will provide service dogs to veterans with psychological health concerns including PTSD.

Montalvan and I will continue to do what we do best: serve others and try to make a difference.

Montalvan identified resources he feels are particularly helpful to veterans coping with psychological health concerns. "Both afterdeployment.org and the Real Warriors Campaign are excellent resources,” said Montalvan. “Additionally, Tuesday and I have a particular fondness for The Soldier's Project and believe in their efforts wholeheartedly.”

Check out these service dog organizations and Make the Connection, a new online resource from the VA for veterans and their families:

Used with permission from the Defense Centers of Excellence for Psychological Health & Traumatic Brain Injury. www.dcoe.health.mil.