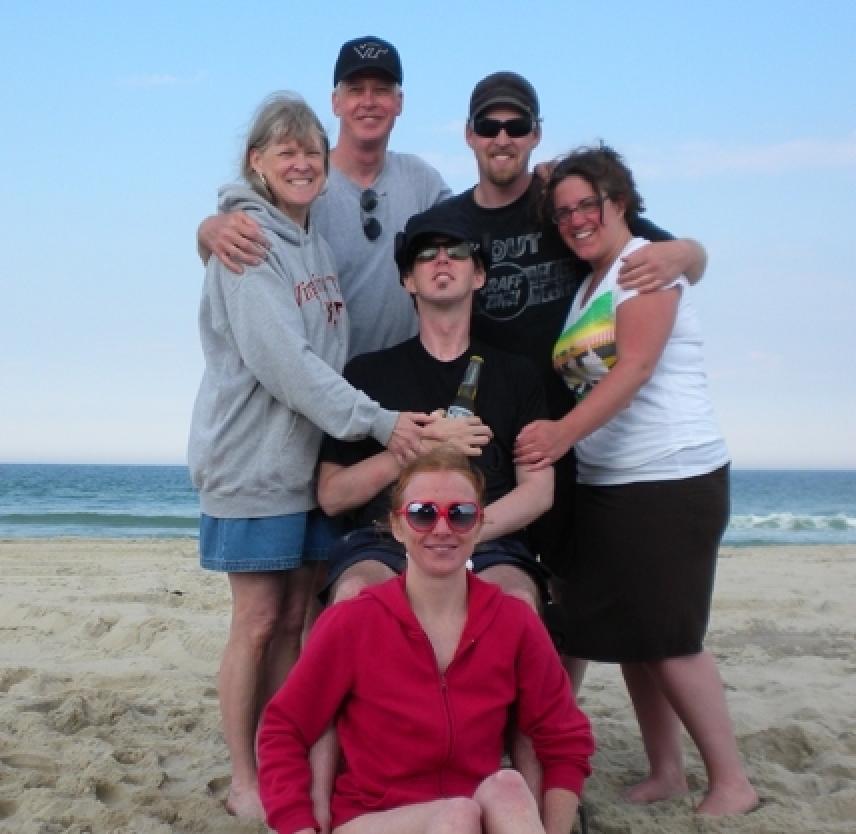 Have you ever dreamt that you were terrified, you screamed, but nothing came out? Take that one step further and imagine you are paralyzed, too. You can’t shield your face with your hands or run away, but you see, hear, and understand everything coming at you. That’s “Locked-In Syndrome” (LIS), a condition that persists in some people after a brainstem stroke or a traumatic brain injury. The French call it “maladie de l’emmure vivant,” which means “walled-in alive disease.”

Two years ago, my neighbor, Dan Duggins, a 34-year-old world-class drummer, was a young rising star. My teenage daughters loved his music. Dan let them visit his tour bus when it graced our cul-de-sac on visits home, and he once gave them an autographed drum skin signed by his band members in Hot Rod Circuit. Dan seemed invincible as he danced on the edge of fame, until he experienced a sudden, debilitating headache while driving with band members to a gig in NYC on April 27, 2010

His friends rushed him to a hospital in Staten Island where doctors assumed a drug overdose, and stabilized him with a trach tube. Like many young musicians, Dan had no medical insurance. His parents, Chris and Tom, rushed to New York from Virginia that night. They insisted Dan was not using drugs, to no avail. After four days, the hospital did a brain scan to assess damage and learned that Dan had suffered a brainstem stroke. The Duggins were told there was nothing else to be done. They slept in the ICU waiting room for a month.

According to the National Institute of Neurological Disorders and Stroke, “Locked-in syndrome is a rare neurological disorder characterized by complete paralysis of voluntary muscles in all parts of the body except for those that control eye movement. It may result from traumatic brain injury, diseases of the circulatory system, diseases that destroy the myelin sheath surrounding nerve cells, or medication overdose. Individuals with locked-in syndrome are conscious and can think and reason, but are unable to speak or move. The disorder leaves individuals completely mute and paralyzed.”

Once Dan could breathe on his own with a stable heart rate and blood pressure, he was flown to HealthSouth in Virginia to be near his parents’ home. It took only a month for HealthSouth to recommend a nursing home. Chris and Tom insisted they could take care of their son in their own home. More than one doctor told them, “We hope you know what you’re getting into.”

For two-and-a-half months, Dan was completely paralyzed except for his eyelids. He used his eyes to communicate “yes” (looking up) or “no” (eyes closed). If he wanted to say something, he would blink. Using a spelling strategy, he communicated messages by saying yes or no to one letter at a time.

LIS is rare, and it’s hard to find statistics, but Emax Health reports that 90 percent of locked-in patients die within the first four months of onset. It’s also hard to figure out the number of people who are locked-in, since some are wrongly diagnosed as being in a “vegetative state” or die before the diagnosis is figured out.

Throughout the first nine months following his stroke, Dan suffered painful muscle spasms. “He cried in pain for hours, unable to make a sound, but tears streamed down his face, and we would hold him,” Chris says. I’m visiting their house on a sunny day in June. Dan can cry, but he cannot form words. And although he can see, he has double vision and Nystagmus — his eyes jump constantly.

“Once home, our first battle was the bedsores. Dan had a huge oozing sore from so much time on his back,” says Chris. Tom, an architect, immediately built Dan a standing frame so “he could get vertical” a few times each week. It took two or three people to help Dan stay upright in the frame.

For the first year Dan was home, Chris and Tom took turns waking up seven or eight times each night to tend to him. His parents turned him frequently in the bed and changed his diapers. “We also fed him through the PEG tube, and tended to his tracheotomy,” Tom says. Dan’s wounds healed. In addition to working, Chris and Tom struggled to keep up with applications to Medicaid, visits to doctors, and researching alternative therapies while caring for Dan around the clock. Chris, a manager at Joann Fabrics, typically starts work at 6 a.m., and Tom, an architect works at home. Sleep was measured in minutes and hours, not nights.

When Dan could manage to swallow pills with liquids, the PEG tube came out. The Duggins are all avid gardeners and cooks, and they pureed organic vegetables from their garden into gourmet soups and liquid meals for Dan. I know they are delicious because I’ve eaten them!

In the two years since his stroke, Dan has made incredible strides, but progress is agonizingly slow, and Chris and Tom have managed a herculean schedule to help Dan move forward. Tom had to close his architectural business in January 2012. Chris works full-time since her job provides health insurance. Bills have mounted. Funds are used up quickly, even though many of Dan’s musician friends have held benefits on his behalf, and the neighbors took up a collection. The Duggins have been hit hard both ways: with enormous medical expenses and with the loss of one whole income.

And yet, when visiting them, you don’t see bitterness, hopelessness, or anger. You see love. Love and fortitude resonate from every corner of their home, and that love is projected like a laser on Dan.

Chris invites me for a lunch of homemade potato leek soup, pureed squash with apple pie spices, a baked vegetable dish smothered in cheese, and fresh cream cheese cake covered in bright berries for dessert. Cooking is a joy for them. Dan watches cooking shows, memorizes the recipes, and spells them out to Chris for some great dishes!

While visiting, I wanted to hear Dan’s thoughts, but he can’t jump in with a comment very easily given the usual volley of words that play across a room at any given time.

“What’s the hardest part of all?” I ask the family.

“Time,” Tom says. “I’d like to have 48 hours in a day to do the hundreds of things I need to do to keep Dan on track to recover, but we do the best we can. If we don’t do our exercises with him every single day, his muscles atrophy within a week, so we can’t take time off.”

“Tell me what a day in your life is like around here,” I say.

“Well, Dan sleeps until 9,” Chris says. “I’m up at 6 and work till 3. We start the day stretching Dan in bed, and we all have breakfast in bed.”

“After breakfast it’s workout time,” Tom adds. “I work with Dan for three hours. I stretch every muscle, work on joint flexibility, help him sit up, work on strength and balance, help him with grasping and diaphragm exercises — you name it. Twice a week, we go to the gym in addition to therapy appointments, but it takes so long; it’s easier to stay here. I’m with Dan 13 hours a day, seven days a week. I have to rotate specific workouts since there’s not enough time to do it all in one day. Of course, Chris helps in the afternoons and evenings after work.”

“And on my days off,” Chris says, “or in the evenings, we squeeze in time for chores. Tom does all the groceries and pharmacy runs — gets him out of the house a bit while I work with Dan. And we catch up on the laundry, cleaning … that sort of thing.”

Dan closes his eyes, a No.

“Not speaking?” An emphatic yes with his eyes. His legs begin to vibrate; it’s as if he’s literally jumping out of his skin to tell me something. Tom and the doctors calls it “toning,” the involuntary muscle contractions that are part of spastic hypertonia. One of the reasons that Dan cannot speak is because he lost all sense of feeling in his tongue and lips as well as his body. His stroke has caused a lack of muscle coordination, and his diaphragm needs to be strong to force air out. Tom says, “If you can’t feel the muscle, you can’t make it move, but feeling is coming back.”

Back to the daily routine, Chris continues, “After dinner we do more work, clean or shower Dan, brush his teeth, and get him ready for bed. He conks out at around 10:30 or 11 p.m. We’re all pretty zonked by then.”

I sit at their kitchen table full of gratitude for my family’s health, and an overwhelming sense of wonder at the power of parental love.

Dan has had nearly every kind of therapy imaginable: acupuncture, massage, speech, physical, and occupational therapy, and neuromuscular stimulation. The Duggins will try anything that looks promising because Dan has made progress. He now breathes on his own and can chew and swallow solid food as of May 30, 2012. He tells Tom when he has to use the bathroom and has regained bowel and bladder control; but still needs Tom to lift and hold him, and he has regained muscle strength and some fine motor movement, but not control. Dan can now stand with minimal support, an incredible achievement.

“What would you tell others going through this?” I ask.

“To never give up,” says Tom. Chris agrees. Dan sits in his wheelchair next to me. His eyes look up several times. He’s saying, “Yes. Yes. Yes.”

The Duggins family would like to personally thank Heather Courtney, Stephen (Dan’s brother) and his wife, Jeannine, Aias, Aurore, Lisa, Stacy, Steve, Monica, Dan’s band mates, Valerie, Courtney, Dana, JoAnn, Rosemary, Hugh, and many others from Brooklyn and Richmond that have been a help and motivating force for Dan.

Written by author and caregiver Rosemary Rawlins for BrainLine, 2012.

To read an excerpt from Rosemary's book, Learning by Accident, click here.