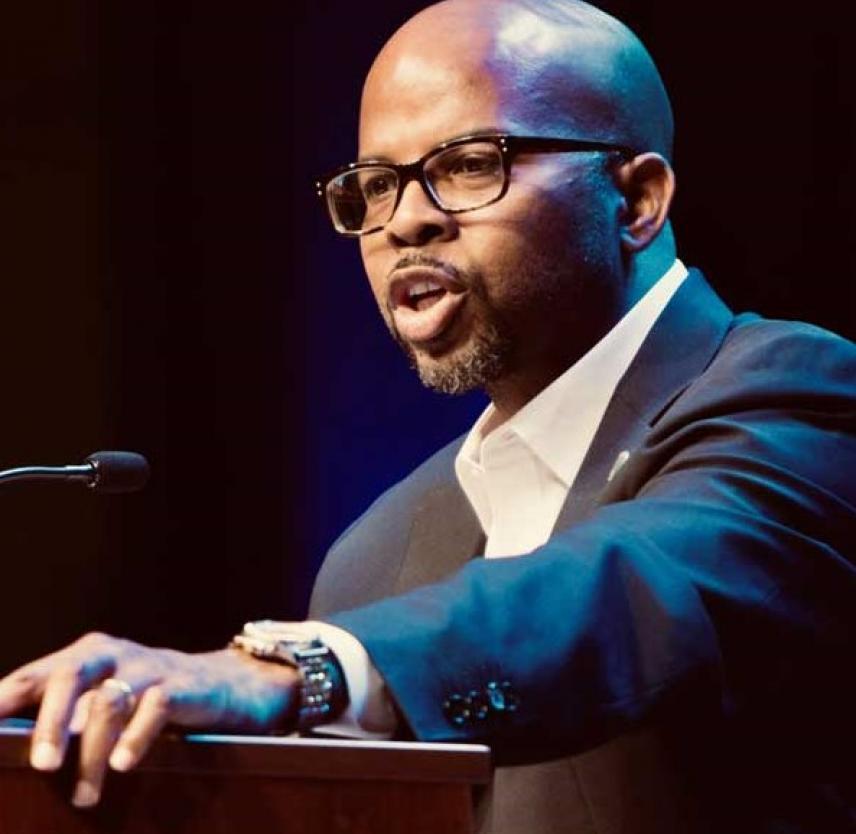 ​​I believed in heroes growing up, even though I saw very few, if any, up close. Heroes existed in comic books and television shows, or in the real lives of others. Not in my life. I saw the world as one big jungle where survival meant hoping the lion would spare me and those I loved, rather than having the strength to resist being eaten. The only way to stop any abuse I saw as a kid was to run from it. Cry about it. Then try to forget it. No heroes. Just a desire to be one every time I left my home, even as I often felt powerless to make life safer for my mom and younger siblings.

For that reason, nothing became more important to me growing up than to be someone’s hero. That, more than anything, was my purpose as I signed my life away to become one of “Uncle Sam’s Misguided Children.”

The Marine Corps recruiters didn’t have to convince me to join after I’d determined that college was financially out of reach for me, despite graduating near the top of my class. I spent my 17th birthday at the Military Entrance Processing Station in Buffalo, New York, doing blood tests, answering probing questions about my life, and undergoing a litany of physical and mental exams before finally raising my right hand to take the oath of enlistment.

Later—after boot camp and graduation and deployments and time as a drill instructor—that’s about the point when my recurring memory of enlistment would end as I lay staring into the dark, listening to the IV drip incessantly beep next to me, as the night nurses laughed and cajoled at the nursing station right outside my room. I wished to the point of tears that I could go back in time and take a path other than the one that led to the miserable place where I now found myself.

My regret had nothing to do with the fact I was now isolated, immobilized, and disoriented in a Veterans Affairs hospital, haunted by my misfortune. I knew the risks when I joined the Marines. I expected to go into harm’s way someday, like my uncles and grandfather had during World War I, World War II, Korea, and Vietnam.

The Desert Shield military campaign started in the Persian Gulf on the day after I arrived at Parris Island for recruit training. We didn’t know much about Saudi Arabia, Kuwait, or Saddam Hussein, but we did train for the day we’d be bringing the smoke to him and his army. So the possibility of suffering injury or dying, in our minds, was a risk we willingly chose to bear. Over the next 11 years, I’d bear that risk as I advanced through the ranks, deployed to foreign lands, trained recruits as a drill instructor, and earned the rank of warrant officer. In other words, doing the work that heroes did to prepare for the moment, in my mind.

During that period, geopolitical conflicts occurred in hot spots all over the world. Places like Somalia, Bosnia, and Venezuela. I thought for certain we’d eventually get the call to heroism, and we certainly did the moment I turned on my television just in time to watch the South Tower get hit by an airplane as the North Tower smoldered on Sept. 11, 2001. From that moment, a mix of panic, anger, and confusion was quickly ameliorated by the sense of nervous, excited anticipation that ran through me.

Finally, I could do what Marines do. The time had finally come for me to prove that I could confront the abuser and defeat the bully.

As I watched several members of my unit and peers in my MOS, or job, receive special orders to deploy, I spent the next couple of months wondering when my number would come up. By the third month, I told myself I’d either end up in Afghanistan or the brig as I fired off an email to my MOS monitor at Headquarters Marine Corps, “tactfully” demanding to know why my senior staff NCO and a fellow warrant officer had gone to Afghanistan and I had not.

After a period of anxious anticipation, it happened: orders to 1st Marine Division to be executed in the next 30 days. Before me now sat the greatest test I’d ever faced in my 29 years of life—but not in a way I could have ever imagined.

My eyes slowly blinked open to what sounded like heavy, mechanical breathing to my left. Still dizzy and barely conscious, I could feel the synapses in my brain fire off, trying to bring hazy images and memories into view, wanting to make sense of why I was lying down, staring into complete darkness. It took me a moment to realize the breathing sound I heard wasn’t someone else’s. It was mine. A ventilator paced my diaphragm, controlling my breath. As I realized this, I tried to take in a gulp of air, only to be suppressed by the machine as it sped up to regulate airflow through the tubes going through my nostrils and down my throat.

Panicked, I struggled to move and yell. I could do neither. The more I struggled, the more I felt suffocated, like Seligman’s dogs in the electric cage. In my case, learned helplessness may have been the only pathway to relief as I stopped long enough to slip back into unconsciousness.

The next time my eyes opened, a doctor stood over me, explaining how I’d been in a serious vehicle crash three days before. My spinal column was fractured, damaging my spinal cord, after I tried to avoid a collision between a car and a semi in front of me. The move caused my own vehicle to spin out of control and flip three times. Not exactly the type of danger I trained for, I thought. If my fate were to live the rest of my life in a wheelchair, my story would be about how a bullet or IED took me out, not some goddam traffic accident. Heroes don’t go out like this.

Before long, the reality that my time in uniform had ended took over every waking thought I had. How close I’d come to executing those orders and living my dream became part of the torture. No lead up to some climactic, heroic encounter with an enemy. It was simply over.

During my recovery, I began to fetishize the war experience in my mind, wondering how being paralyzed in my crash compared to being blown up by an IED. I’d sleep all day and stay up all night, watching 24-hour cable news coverage of troop updates, immersing myself in the narratives. Some nights I’d have nightmares and hallucinate as the news footage distorted my own traumatic memories—with the help of the drug cocktail I’d been prescribed—quieted only by nightly shots of whiskey. 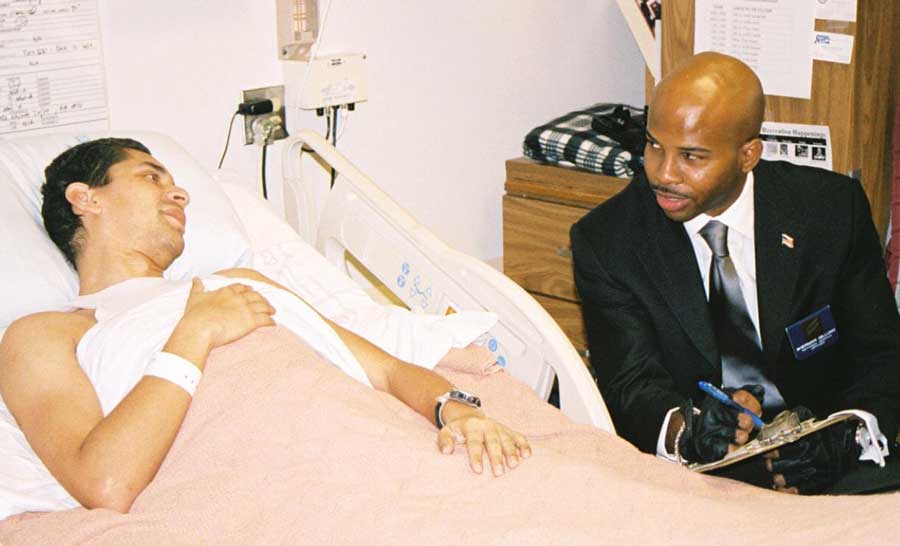 My lost sense of purpose had become my identity until I met Eric and Curtis, two newly injured Marines, during an outpatient appointment on the spinal cord injury unit—a meeting that would change my entire perspective.

Eric and Curtis both had suffered paralysis in Iraq. One by a bullet shot through the stomach, the other by an IED. True heroes in my book. While both men had expressed no regret for serving in harm’s way, I could see how each came back missing a part of himself in some way. Hearing their stories made the experience less abstract for me, less glorious, as I could better imagine what getting shot or thrown in the air by an explosion actually felt like, along with the other ugly aspects of combat.

The stories began to sicken me as I listened to them in gritty detail. By the end, Eric and Curtis’ combat medals no longer looked like trophies to me. They looked more like colorful patches that concealed their torn spirits and the holes in their being. While all three of us were paralyzed and ostensibly shared the pains of that part of the experience, I couldn’t help but to wonder how different the dialogue with myself, behind my eyes and between my ears, would’ve been had it been filtered through experiences similar to those of Eric and Curtis.

The day Curtis unexpectedly died from his brain injuries proved to be the moment my mind took a reflective turn, understanding that heroism came at a cost that might’ve been too great for even me to bear. Or for anyone to bear who had imagined a heroic moment but hadn’t actually faced the danger of combat.

I could never be a hero by my own definition, and I had to be fine with that out of respect for those, like Curtis, who gave it all.

What I could do, however, was ensure they’d never pay the cost of heroism alone. I could not fight by their sides on the battlefront, but I could commit to fighting the enemy on the home front: a formless, insidious enemy who used homelessness, joblessness, addiction, incarceration, broken families, and lost hope to add to the body count at a rate of 17 or more a day. An enemy I’d stare in the face and confront from hospital bedsides and communities from Capitol Hill and the White House for more than 17 years and counting.

I’d learn an important lesson through this experience: Heroes also need heroes. I’d also come to understand that heroes aren’t created or manufactured. They’re revealed when it most counts. The mere act of choosing to matter when it counts, while giving some measure of sacrifice, is the only prerequisite. Dedicating my life to doing just that on behalf of those who served did not make me the hero I always wanted to be—but it made me the hero I was chosen to be.

Editors Note: This article first appeared on The War Horse, an award-winning nonprofit news organization educating the public on military service. Subscribe to their newsletter.

Sherman Gillums Jr. served in the U.S. Marines for 12 years between 1990 and 2002. He received an honorable discharge at the rank of chief warrant officer two after suffering a career-ending injury. His awards include two Navy/Marine Commendation Medals, Navy/Marine Achievement Medal, Drill Instructor Ribbon, and the Global War on Terrorism Service medal. After his discharge, Gillums began a career in veteran advocacy, which included work as an appellate representative at the Board of Veterans’ Appeals in Washington and serving as executive director for Paralyzed Veterans of America, chief strategy and advocacy officer for AMVETS, and currently chief strategy and impact officer for National Alliance on Mental Illness. He has testified before Congress as an expert witness and appeared on national media as an influential leader in veteran advocacy. Gillums is a new member of The War Horse’s board of directors.