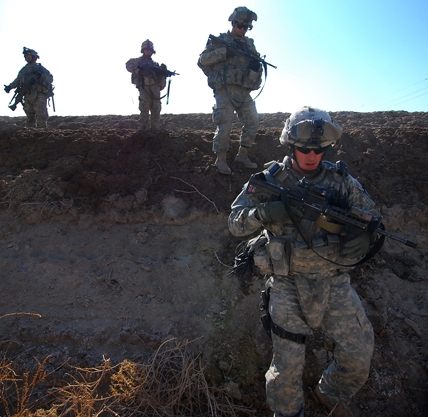 War and trauma have always gone hand in hand.  Twenty-seven centuries ago in The Iliad, Homer described a psychologically tormented Achilles whose behavior would likely warrant a psychiatric diagnosis today.  In the 20th century, we have variously used “battle fatigue,” “shell shock,” “soldier’s heart,” and post-Vietnam syndrome to describe the internal battles many soldiers face when they return from the field.

Today, we call it post-traumatic stress disorder, but the name is relatively new to official psychiatry.  It was introduced into the third edition of the Diagnostic and Statistical Manual of Mental Disorders (DSM), the bible of clinical psychiatry, only in 1980.  Before that, the set of symptoms that came to be classified as PTSD was called traumatic neurosis (DSM-1) or “transient situational disturbances” (DSM-II).  War neurosis and other terms have been applied as well.

By any label, it is increasingly clear that current conflicts threaten to leave numbers of soldiers bearing the psychological scars of war.  PTSD is only part of the story.  Depression, anxiety disorders and interpersonal conflicts are also concerns.  Further complicating the picture is the high rate of head injuries in Iraq, which are associated with their own sets of neuropsychiatric consequences.

Head injury has become known as the “signature injury” of the Iraq war. The Web site of the Defense and Veterans Brain Injury Center (DVBIC), a congressionally funded research and outreach agency, cites a brain injury rate of 62% among troops returning from combat duty in Iraq.  i The figure is based on a study of 155 soldiers who were screened for traumatic brain injury (TBI) at Walter Reed Army Medical Center in 2003.

Blast-related TBI, an effect of the over-pressurized shock wave that ripples out from an explosion, is a particular concern in the current conflicts.  In the Walter Reed study, about half the soldiers reported having been exposed to at least one blast; 60% of these blast victims sustained a brain injury.  A study published by Army researchers January 31 in The New England Journal of Medicine ii found that nearly 90% of troops had been exposed to two or more blasts from improvised explosive devices.  The results, by Charles Hoge and colleagues at Walter Reed, are among the first data being mined from the military’s new policy to conduct post-combat assessments on all Iraq returnees.  The study included more than 2,700 Army infantry solders, who were surveyed in 2006, three to four months after their return from a year-long deployment in Iraq.

There is a growing recognition that blast injuries, like other mild trauma to the brain, can cause subtle neural damage that manifests as cognitive and psychological symptoms.  Some problems resolve within days or weeks and some appear to persist long after the injury.  In January, the Department of Veterans Affairs (VA) recognized blast-related TBI as a special neurological condition, opening the door to greater disability benefits for affected soldiers.

Unfortunately, there is little evidence-based science to guide policies or clinical practice. Few studies have rigorously tracked the neuropsychological sequelae of head injuries longitudinally, and fewer still have focused on combat trauma.  So there are more questions than answers at this point, particularly with regard to the effects of blast injuries on the brain, where the science is surprisingly sparse.

That should change soon.  Congress committed more than $150 million to the Department of Defense (DoD) for brain injury research last year alone, and another $14 million goes annually to fund the DVBIC, which is jointly run by DoD and VA.  The Defense Advanced Research Projects Agency (DARPA) has launched its own $9 million research blitz; one program is developing helmet-mounted sensors to collect data on blast characteristics such as pressure, electromagnetic pulse, and thermal shock.  DARPA researchers and a handful of academic laboratories are also using computer modeling and animal experiments to investigate how blasts impact neural tissue.

The interplay of TBI and mental health problems, particularly PTSD, has become a vexing issue for the military.  Jordan Grafman, a senior investigator at the National Institute of Neurological Disorders and Stroke (NINDS) and member of the Dana Alliance for Brain Initiatives (DABI), has been studying the links in brain-injured Vietnam veterans.  He says, “The question is: does somebody simply have PTSD, or have they been exposed to a minor head injury?  The diagnosis is difficult because similar deficits may be seen in both cases.  How do you tease that apart?  It’s also complicated by the fact that we don’t know what the risk factors are for getting a mild head injury if you’ve been exposed to a blast.”

In the Walter Reed research study reported by Hoge et al last month, the researchers found a strong co-occurrence of mental problems in the 15% of soldiers who had suffered mild brain injury (concussive injuries were subdivided to differentiate people who suffered loss of consciousness from those who experienced “altered mental status,” such as feeling dazed or confused, after their injury).  Among soldiers reporting loss of consciousness, almost half (43.9%) met criteria for PTSD, compared to about a quarter (27.3%) of those who reported altered mental status.

Part of the problem is that post-concussive symptoms overlap significantly with PTSD symptoms, making it difficult to sort out what is TBI-related and what might be due to an underlying psychiatric problem.  Knowing could make a difference in terms of treatment and follow-up care.  Moreover, as psychologist Richard Bryant of the University of New South Wales in Sydney, Australia, pointed out in an editorial accompanying the Hoge paper, mild TBI typically occurs in the context of a traumatic event.

“There are no reliable means to differentiate between symptoms involving impaired awareness that are caused by severe stress or mild traumatic brain injury,” Bryant said. “Misattributing post-concussive symptoms to brain injury may have unfortunate implications, because it may be concluded that recovery depends on neurologic factors.” This, he cautioned, could decrease the likelihood of incorporating other therapeutic strategies, such as educational approaches to normalize stress reactions.

New evidence by Grafman and colleagues at NINDS adds another twist to the TBI-PTSD interaction.  In the February issue of Nature Neuroscience, iii Grafman’s group reported that veterans with injuries to certain parts of the brain were less likely to develop PTSD.  Surprisingly, damage in two areas implicated in the neural circuitry of PTSD – the prefrontal cortex (PFC) and the amygdala – actually had a protective effect.

“It’s sort of counter-intuitive or paradoxical to think that somebody can actually escape a disorder because they have a lesion,” Grafman acknowledged, “but that is what we found.”

The data come from the Vietnam Head Injury Study, a longitudinal investigation  of Vietnam veterans who suffered penetrating brain injuries during combat.  The researchers identified rates of PTSD in a subset of 193 of the study participants and compared them to a control group of 52 Vietnam veterans who had combat exposure but no head injury.

Previous studies have shown that PTSD is associated with under-activity in the prefrontal cortex and over-activity in the amygdala, as well as shrinkage of the hippocampus.  A decade of basic science research on fear processing tells us that the amygdala is critical for fear-based learning.  It evolved to keep us out of harm’s way by imprinting a strong memory trace of dangerous or fearful situations.  The prefrontal cortex is thought to suppress inappropriate expression of this memory.

“The prefrontal cortex helps place fearful memories in the right context, so that when we’re in harm’s way again, the fear memory is reactivated, but at other times it is suppressed,” explains DABI member Steve Hyman, provost of Harvard Medical School and a former director of the National Institute of Mental Health.  The simplistic conventional thinking about PTSD pathology, he says, is that “the amygdala is too strong, and the PFC is too weak, so these fear-based memories are always in the foreground influencing thoughts, emotions, and behaviors.”

By this model, damage to the PFC might be expected to increase the likelihood of PTSD: with no more brakes keeping amygdala activity in check, fear-based memories are inappropriately expressed, even in nonthreatening situations.  This mechanism has been suggested as one possible explanation for the co-occurrence of PTSD with some brain injuries.  Yet Grafman’s research shows just the opposite.

“It may be too simplistic to think of the PFC as merely suppressing amygdala activation, and in fact it’s probably better to think of the two brain areas in terms of a partnership,” Grafman says.  “They go up and down somewhat in concert because they’re inextricably linked to each other via neural pathways.”

The findings help sort out an issue that has been unsettled in PTSD research: whether brain changes seen in the disorder on neuroimaging are central to the development of PTSD, or if they’re merely after-effects of the pathology.  “This work suggests to us that the amygdala and the prefrontal cortex are critical to PTSD susceptibility,” Grafman says.  “On the other hand, changes in the hippocampus that have long been associated with PTSD are probably a consequence of the disorder but are less involved in susceptibility.”

This has important implications for developing rational therapies.  “In terms of treatment, these findings imply that one way to diminish the intensity of PTSD would be to modulate the activity of the prefrontal cortex or amygdala through targeted drugs or some sort of transcranial stimulation.  You don’t need to cut off the circuit, you merely have to quiet it, in essence, just a little bit.”

New strategies for treating PTSD are sorely needed, as there are currently few effective therapeutic options.  Exposure therapy, a type of psychotherapy that gradually reintroduces the trauma in a safe environment, is supported by the strongest evidence for effectiveness, according to a 2007 Institute of Medicine (IOM) report that was undertaken at the behest of the VA.  Even though some SSRI-type antidepressants are approved for treating PTSD, the IOM found “inadequate” evidence that they are effective – an opinion that shone a light on the gaps in PTSD treatment and sparked considerable controversy.  IOM also cited a dearth of research on treatment efficacy in veterans with head injury.

“Once chronic PTSD has set in, the available treatments really are far from ideal,” Hyman says.

That makes early intervention critical, both to prevent PTSD from developing in the first place and to stop it before it becomes chronic.  The most promising pharmacological possibilities, according to Hyman, are aimed at blocking the consolidation of the fear memory – kind of the drug equivalent of the “memory erasers” used by the protagonists in “Men in Black.”  Basic science research has zeroed in on a particular type of brain receptor (beta noradrenergic receptors) that appears to be critical to the laying down of emotionally charged memories, suggesting that compounds that block these receptors might have an effect. A generic drug, propanalol, which is commonly prescribed for rapid heart rate, high blood pressure, or anxiety, does just that, and has been investigated for PTSD in early clinical trials.

“Propanalol looks moderately promising to head off the development of PTSD,” Hyman says.  “But clearly, we need to find better drugs and better interventions.”

Written by Brenda Patoine, a freelance science writer who has been covering neuroscience for more than 15 years. bpatoine@aol.com