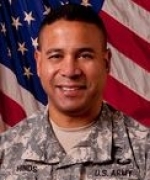 As national director, Colonel Hinds oversees all aspects of the organization’s mission, which is to serve active duty military and veterans with traumatic brain injury through state-of-the-art medical care and care coordination, and innovative clinical research and educational programs.

Colonel Hinds, who is board certified in neurology and nuclear medicine, leads DVBIC with integrated multidisciplinary approaches to care.

While deployed to Afghanistan from February to July 2012, he oversaw standardization of care at 11 concussion care centers as the theater neurology consultant. Performing site visits allowed him to ensure that staff had appropriate training, education, and resources. He reviewed cases, shared best practices, and worked with theater providers to identify and close gaps in patient care.

From August 1990 to March 1991, Colonel Hinds was the executive officer, treatment platoon leader, and ambulance platoon leader of C Company, 224th Forward Support Battalion, 24th ID, in Saudi Arabia and Iraq. He completed the US Army Medical Department patient administration course and served at the Army Defense Medical Information System from 1991 to 1992.

Colonel Hinds has held multiple appointments and academic posts, including nuclear medicine consultant for the North Atlantic Regional Medical Command. He graduated from the United States Military Academy in 1988 and served as a Medical Service Corps Officer from 1988 until 1992. He received his MD from the University of Connecticut Health Center and was commissioned as an Army Captain in 1996.

Colonel Hinds is the fifth national director of DVBIC, which is celebrating 21 years of service this year. A Department of Defense-funded collaboration with the Department of Veterans Affairs, DVBIC supports 16 care and treatment sites nationwide; conducts clinical research; educates service members, medical personnel and caregivers; and consolidates and reports all DoD TBI-related incidence and prevalence data.

Current Research for Diagnosing and Treating TBI
Standardized Care Across the DoD No Matter Where You Are
Rest and Progressive Return to Daily Activities After TBI
DVBIC's 15-Year Longitudinal Study on Traumatic Brain Injury
Raising Awareness of Brain Injury: Head for the Future Program
The Faster and More Standardized Care for Concussion, the More Effective
The Progressive Return to Activity After a Combat-Related Concussion
The Move to an Incident-Reporting System to Identify and Treat Concussions
Tools for Recognizing Concussions in Theater