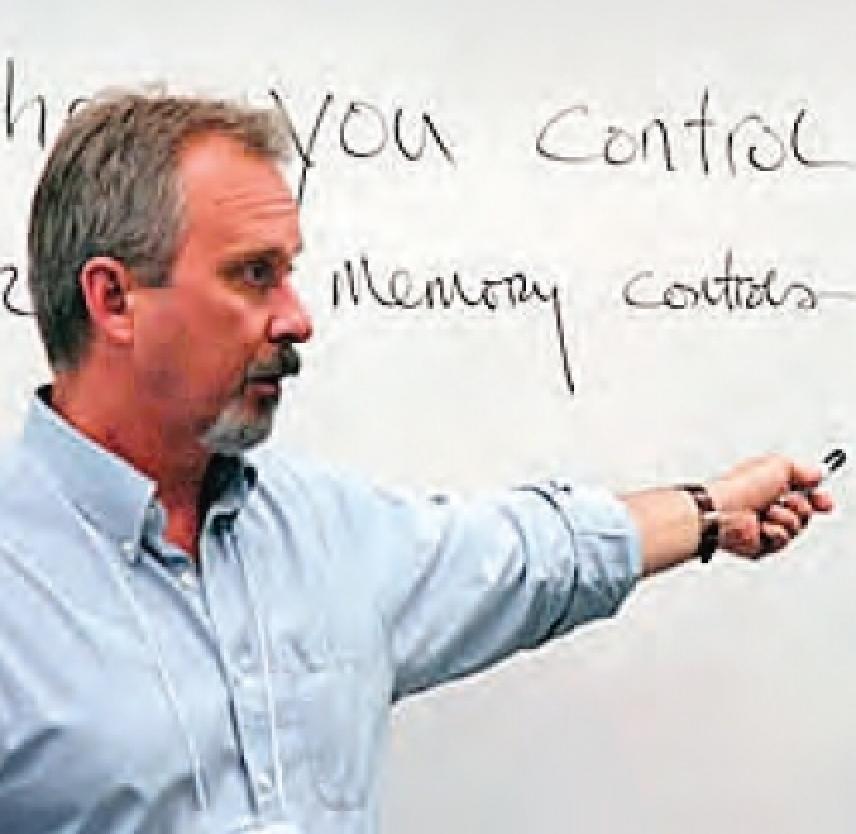 These words on a sign in Ron Capps’ office remind him not only of how he has learned to deal with his own past but also how his new work helps others. He deployed to wars for the U.S Army, U.S. Army Reserves, and the State Department over a quarter century, witnessing unimaginable horrors, including genocide in Rwanda and ethnic cleansing in Kosovo.

Part of his job during those years was to write factual reports of events so that analysts and policy designers and implementers in D.C. could understand the situation. As his experiences began to haunt him more and more, he started writing a second, private version that included many more horrific details he could no longer bottle up.

The private writing helped but, eventually, he says, being witness to the horror of what human beings can do to one another in war “pushed me over the edge.” Pistol in hand, he contemplated killing himself while deployed to Darfur. A fortunate phone call from his wife diverted him.

Diagnosed with PTSD, he left government service in 2008, but he still had to find a way to deal with his demons. He entered grad school on the GI Bill to get his MA in writing, knowing that writing would help him.

This is your brain on trauma

Capps explains that a traumatic event revs up the fight/flight/freeze response in the brain’s amygdala, preparing us to take fast action. “The higher brain functions go by the wayside,” he says, “and the limbic system tells us what to do, such as focus eyes, send power to the legs, and so on. Same thing happens to a gazelle on the Serengeti when it sees a lion.”

Unlike gazelles, however, humans remember, and “your mind wants to reproduce the event when you remember something,” says Capps. “That’s okay when you’re watching Field of Dreams or smelling Cinnabon, but it’s not good with trauma.”

Fortunately, he learned from his doctors at Walter Reed National Military Medical Center that the arts help restore higher brain function. Writing, his chosen art, helps him get control of his traumatic memories, unlike “therapy, medication, and whiskey,” which didn’t, he says.

As he continued his studies, Capps began wondering what he would do with his new knowledge of how writing heals. An idea came to him: He would give it away. That was the seed for the Veterans Writing Project (VWP). (veteranswriting.org)

Based in Washington, D.C., the VWP is a 501(c)3 nonprofit that provides no-cost writing seminars and workshops. Its mission: “We believe that every veteran has a story to tell and that most of us need help doing so. We teach and mentor veterans, service members, and family members who want to improve their writing, and we do it among other veterans and family members.”

All the seminar and workshop leaders are working writers who hold either an MA or MFA in writing. They are also combat vets. They provide instruction and mentoring in memoir, history, journalism, fiction, poetry, playwriting, and screenwriting, so program participants can receive help in whatever area of writing they choose.

The power of writing

Much of the foundation for VWP comes out of research on the healing power of making art. “Writers have known that telling any story is therapeutic for about 25 or 30 years,” Capps says. “The science behind it is fascinating.”

Capps grew intrigued with this science as he was investigating art therapy. The research began in the mid- 1980s with James Pennebaker, PhD, a research psychologist at the University of Texas at Austin. Pennebaker began researching how writing down one’s thoughts and feelings about traumatic experiences — what he called “expressive writing” — could help people heal from those experiences. He conducted his first study with college students, and the results were startling: Writing about one’s deepest feelings and thoughts about a traumatic experience — for only 15 minutes four days in a row — led to fewer illness visits to the health center over the next six months, as well as a more positive outlook, improved moods, and greater physical health. (Pennebaker, James W., PhD. 1990. Opening Up: The Healing Power of Expressing Emotions. New York: The Guilford Press.)

Since that first research study, more than 200 other researchers have confirmed the power of writing about deep thoughts and feelings. The results often were the same, with benefits to physical and emotional well-being.

Pennebaker’s research and writing became the keystone of VWP’s work. All the participants at Walter Reed have read his work, and Pennebaker went to Walter Reed to help the program directors structure the program.

There is a major difference between expressive writing as studied by the researchers and creative writing. With expressive writing, a person simply writes, as in a journal, with no concern about structure or the fine points of writing. It’s private writing, simply to get the words out. Creative writing, on the other hand, includes the additional steps of shaping, revising, clarifying, and editing to produce literature to be read by others. These additional steps add to the healing power because the writer can gain distance from the event by shaping and reshaping the experience, transforming it into a memory that no longer hurts. Interestingly, this is true for writing both fiction and nonfiction.

As Capps wrote in his curriculum guide, Writing War: A Guide to Telling Your Own Story, the aim of VWP is forparticipants to write from first-hand experience to “create aliterature of war rather than a literature about war”— to writeabout the entire military experience so that those with littleknowledge of military life can learn and understand.

Capps explains that after World Wars I and II there was“an explosion of writers” who told their stories in now famousnovels, memoirs, and poetry collections. Yet duringthose wars and through Korea and Vietnam, the draft sent tensof millions of people to war, creating a better understandingof war and military life throughout the nation. Now, with lessthan 1 percent of our population in the volunteer militaryduring the last 12 years of war, that widespread understandingis missing. Therefore, says Capps, it’s important for thosewho have lived the military experience, whether or not theyhave ever left the States, to bear witness. “We have theresponsibility to bring back our reports of what happened,”says Capps.

This tradition goes back to ancient Greece, he explains: “The whole town would listen to the soldiers’ stories. It was hugely healing for the warriors and crucial for others to understand what war is like.” Today, writing offers the storytelling avenue that leads to healing in the writers and increases understanding in those who read it.

VWP is “creating an archive of literature written by, about, and for the military community,” says Capps. It publishes a literary journal, O-Dark-Thirty, and is gearing up to publish books through its BCG Books. Most VWP workshops and seminars now take place in the Washington, D.C., area, but they are expanding to the New York and Boston areas, and he “would love to go out west,” says Capps.

The VWP is funded through donations and sponsorships; no government funds are used. See more at the website: veteranswriting.org

Barbara Stahura, a certified journal facilitator, is the co-author, along with Susan B. Schuster, MA, CCC-SLP, of After Brain Injury: Telling Your Story, the first journaling book for people with brain injury. Editor of Brain Injury Journey, she presents journaling workshops around the country to people with brain injury, family caregivers, and others, and is a member of the faculty of the Therapeutic Writing Institute and the Lash & Associates speakers bureau. She lives in Indiana with her husband, Ken Willingham, a survivor of TBI.