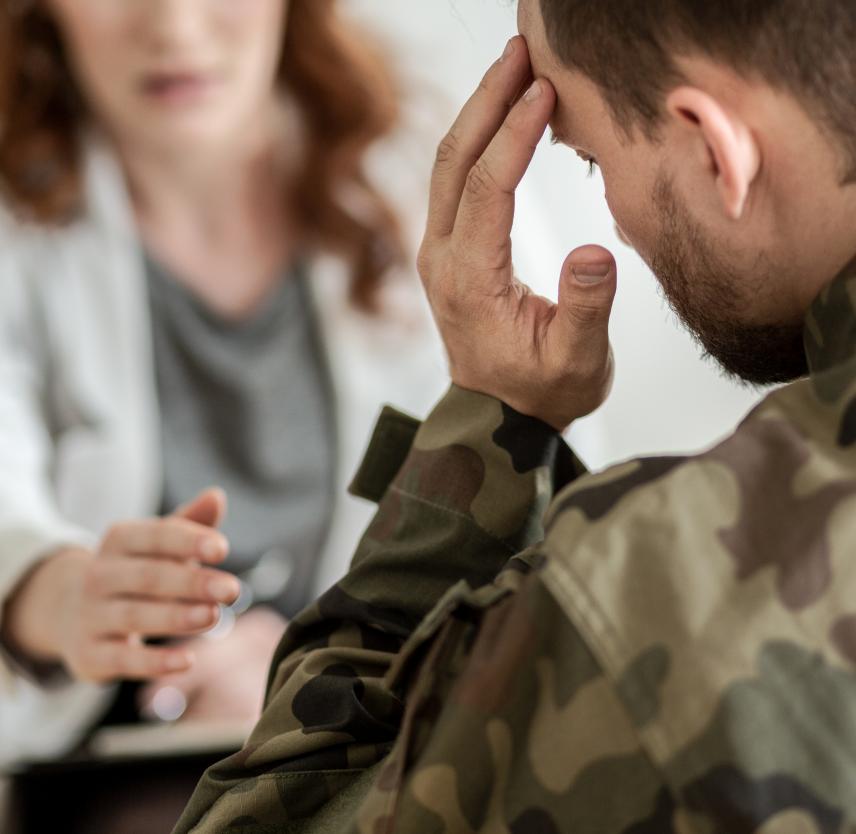 The psychotherapy approaches considered by the Departments of Veterans Affairs and Defense to be front-line treatments for military-related PTSD don’t work for up to two-thirds of patients, a new report published in JAMA Insights finds.

Cognitive processing therapy, or CPT, and prolonged exposure therapy, PE, are two approaches for treating post-traumatic stress disorder that focus on a patient’s traumatic experiences and helps them process the memories associated with the horrific events.

But a review of results from several large clinical studies conducted since 2015 on military personnel and veterans, researchers with New York University’s Grossman School of Medicine found these psychotherapies have limited success in these patients, despite recommendation as preferred treatments in the VA/DoD Clinical Practice Guidelines for the Management of PTSD and Acute Stress Disorder.

In fact, according to the review published Jan. 30 by JAMA, interventions that don’t focus on traumatic events, such as present-centered talk therapy, transcendental meditation and medication, seem to work about as well as emotionally charged PE and CPT.

The report did find that all active treatments considered — including PE, CPT, present-centered therapy, meditation and medications — reduced PTSD symptoms, often “with moderate to large effect.”

Still, just 31 percent to 50 percent of patients actually achieved what Steenkamp would call “a clinical success.”

“We found that a third to half the patients respond well [to CBT or PE]. Of course that’s the same way as saying two-thirds to half don’t respond in a way that we would consider successful,” Steenkamp said.

Since at least 2010, DoD and VA have recommended trauma-based therapies for treating PTSD such as CPT, PE or eye-movement desensitization and reprocessing therapy, EMDR, as the standard of treatment over other interventions such as group therapy, family therapy, hypnosis and relaxation.

In a literature review also published in JAMA in 2015, the NYU researchers questioned the effectiveness of the trauma-focused treatments, given that nearly a quarter of patients who tried CPT or PE dropped out of therapy. They found that 70 percent of CPT or PE patient did experience symptom reduction, but two-thirds still met the criteria for having PTSD.

For the recent review, JAMA asked Steenkamp and the 2015 lead author, Dr. Charles Marmar, a psychiatrist at NYU Langone Medical Center, to update their work.

“Recent PTSD treatment trials show that military-related PTSD is a complex and heterogenous condition, and treating it with a single course of trauma-focused monotherapy is not well tolerated by many patients and has limited efficacy,” they concluded.

Steenkamp said the new research shows that VA and DoD providers should help their patients find treatments that work for them, rather than use a one-size-fits all approach.

As a practicing clinician, for example, she finds trauma-focused EMDR to be highly effective for many of her patients, she said.

Her reviews findings have raised questions about DoD and VA policies that prioritize CPT and PE, she said, and she hopes they spark a broader conversation on new approaches to treating PTSD.

“Step 1 is to realize there needs to be some kind of change to the way the system is now. Right now, we are really hanging our hats on PE and CPT too much and the data are really showing we can’t continue going down that path because we are leaving behind two-thirds to half of patients,” Steenkamp said. “There are multiple roads to recovery.”

Steenkamp encourages physicians treating military personnel and veterans — and the patients themselves — to try different treatments until they find one that works.

“My fear is that the military folks reading your paper are going to read this and think ‘this means there’s no point in going to PTSD therapy, I will just suffer.’ ... But the message is for people to keep trying different therapies, keep giving each one a real shot. Be patient. It can be a lengthy recovery process.”