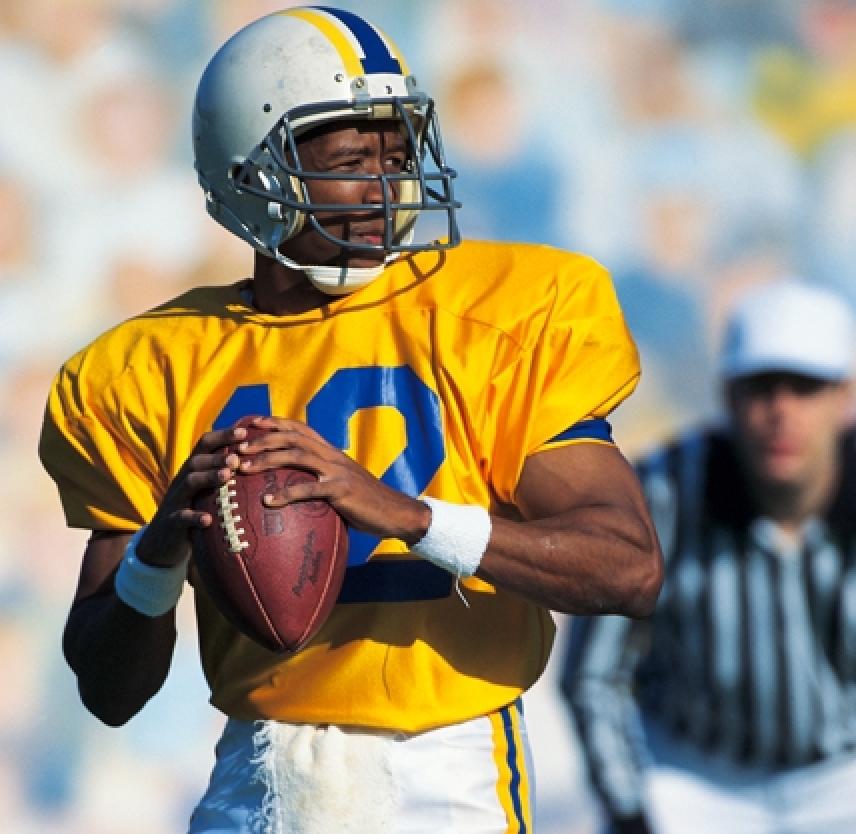 In other football news, weeks ago, Tuesday Morning Quarterback praised the NCAA for matching the National Federation of High Schools' two-year crackdown on dangerous hits. Last week the National Football League joined in with its own crackdown. Roger Goodell, why isn't your league the lead institution in football safety? Why does the NFL always follow high school and college reform? Here is a cause where the NFL needs to get out front and lead: the anti-concussion helmet. Helmets that reduce concussion risk exist. Many NFL players wear them voluntarily. Yet the NFL will not mandate their use, setting a poor example for other levels of the sport.

First, the NFL action last week. Adam Schefter of NFL.com reported Goodell sent all players and coaches a memo about dangerous hits, declaring, "Any conduct that unnecessarily risks the safety of other players has no role in the game of football and will be disciplined at increased levels, including on a first offense." Presumably this means officials have been instructed to more closely enforce helmet-as-a-weapon hits, late hits and out-of-bounds hits. High school cracked down on such hits in 2006, and the NCAA declared a crackdown on such hits last month. At least the NFL has caught up.

But the NFL has not mandated use of anti-concussion helmets, the Riddell Revolution or Schutt DNA. Research suggests they are efficacious; this University of Pittsburgh study found anti-concussion helmets reduce the likelihood of suffering a concussion by about one-third among high school players. Traditional helmet designs seem OK for youth-league play, owing to low intensity of contact. But from the high school varsity level on up, studies suggest football jocks shouldn't have anything on their heads but anti-concussion designs. Some design features of the anti-concussion helmets are the result of NFL studies, which showed that helmet-against-helmet contact is the most dangerous kind of hit, and hits near the ears are most likely to result in concussions. Yet the NFL does not require the anti-concussion helmets it helped inspire. And because such helmets have a slight space-alien look, the recent fashion trend is back toward the traditional shell design. Schutt has been pushing its new Air XP, a traditional-shape helmet that looks really cool, but lacks the anti-concussion engineering of the company's DNA helmet. (Schutt also has a new helmet type, the Ion, which might reduce concussions; it's so new there is no data yet. This startup company claims a breakthrough in helmet padding design to reduce concussions, but its product is not yet on the market.)

On paper the reason for the lack of action to require anti-concussion helmets is that the National Operating Committee on Standards for Athletic Equipment still hasn't made up its mind about whether such helmets should be universal. Though you will be pleased to know NOCSAE recently issued a 10-page set of specifications for football gloves, taking on the highly controversial glove-stitching issue. Inaction by NOCSAE on the helmet question matters because the NFL, NCAA and most state high school sports associations use NOCSAE standards. If NOCSAE mandated anti-concussion helmets, the NFL and all big-college teams would adopt them immediately — if only for liability reasons — while small colleges and high schools would start switching over. Yet NOCSAE keeps twiddling its thumbs, and the NFL has declined to mandate anti-concussion helmets unilaterally — a puzzling stance considering Goodell has said decreasing concussions is one of his priorities.

NOCSAE has a good reputation; past tightening of NOCSAE helmet-engineering rules was important to the reduced incidence of brain and spinal injuries among football players. You hear more about serious football injuries now because all sports issues are better-covered, but the rates of brain and spine injuries, and of football deaths, have been going down steadily for three decades as equipment, sports medicine and coaching knowledge have improved. Research at the University of North Carolina shows that during the 1960s, high school football averaged around 30 deaths per year from head and spine injuries. Today, with the national population larger and far more boys (plus a few girls) playing high school football, head-injury deaths have declined to an average of three per year. Better helmets and NFHS restrictions against helmet-first tackling — high school athletics outlawed helmet-first tackling in 1978, long before the NFL did — are the reasons. Since 2000, participating in high school or college football has created a roughly 1-in-400,000 risk of death. The overall accidental death rate for ages 15 to 24 is 1 in 2,700, so nonsports accidents are a dramatically higher cause of death than football accidents. The teen-to-young-adult death rate for car accidents is about 1 in 4,500 per year. Even adjusting for more time spent in vehicles, arguably you're safer playing football than in the car driving to the game.

But the decline in head injury rates is no reason to stop progress. Universal use of anti-concussion helmets seems like the next logical step. This will be especially important at the prep level, since high school players are more susceptible to head injuries than college players — both the brain and brain case are still maturing in high school, and thus more vulnerable. NOCSAE has been pushing hard on helmet-test standards, to prevent high schools from using beat-up old headgear, while taking its sweet time on the anti-concussion helmet question. Could special-interest lobbying be a factor in the latter? Two or three million traditional-design football helmets are in circulation. A small industry exists around reconditioning those traditional helmets and selling them to high schools, where the vast majority of football action takes place (in revenue terms, the high school football market is much more important to equipment suppliers than college or the pros). The helmet-reconditioning lobby does not want a NOCSAE mandate of anti-concussion designs, because all the old helmets would become worthless.

Yes, new anti-concussion helmets cost $75 to $100 more than reconditioned traditional helmets. But the cost is irrelevant at the NFL and big-college level, and even most small colleges would rather spend an extra few thousand dollars on helmets than face a concussion lawsuit. Cost does matter at the high school level, where money is always tight. But the cost-benefit calculation seems promising. My rough guess is that it would cost about $100 million to equip every one of the 1 million high school football players in the United States with Revos or DNAs. Some high schools have already gone over; my kids' high school team has been all-Revo for four years, and we've had one concussion in that span. The cost seems within reason if it leads to a statistically significant decrease in concussions. Add that football is the sole sport that pays for itself at most high schools, and the case seems strong. The boys (and occasionally girls) who are leaving it on the field deserve the best possible protection.

Head-injury awareness is rising throughout the ranks of sports, in the same way heat-stroke awareness rose a decade ago. At the coaches meeting of the league in which the middle-school team I coach plays, the very first item was a sports orthopedist lecturing on the dangers of concussions, how to diagnose the symptoms, and how to coach boys to avoid head injuries. The "get back in the game kid" macho attitude about head injuries is changing, which is a positive sign. So what are we waiting for? Why won't the NFL take a leadership role by mandating the anti-concussion helmet?