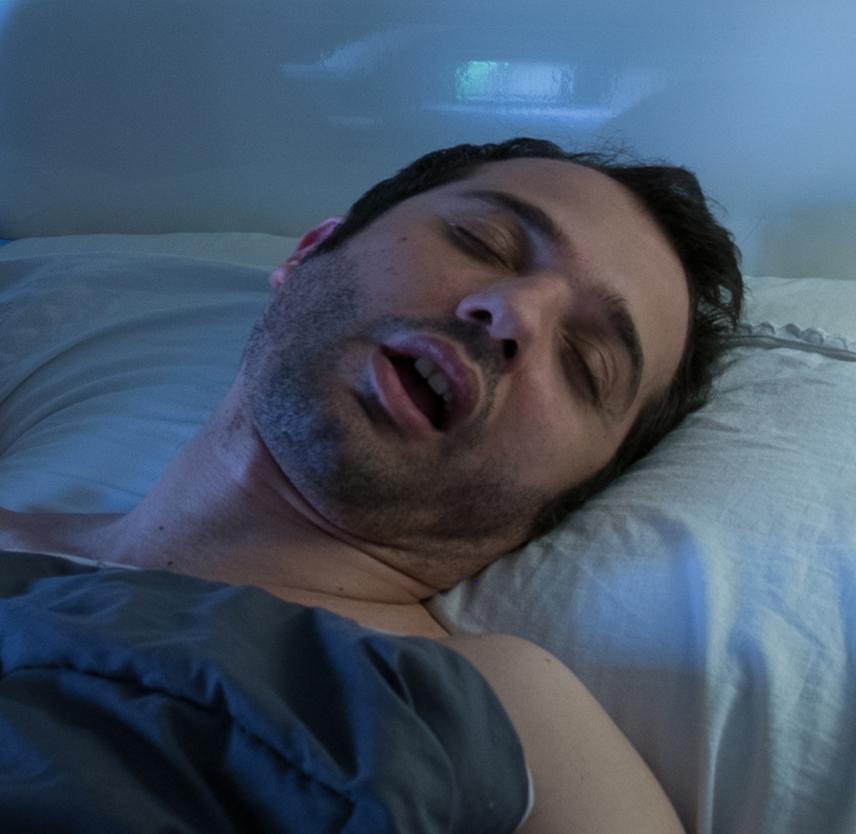 Related Content:
Can You Catch Up on Lost Sleep?
Common Sleep Issues After TBI and/or PTSD
Could My Husband's Sleep Problems Be Related to Earlier Concussions?

What is Sleep Apnea?

Sleep apnea is a sleep-related breathing disorder that is characterized by repeated cessation (i.e., apnea) or near cessation (i.e., hypopnea) of ventilation during sleep. Subtypes of sleep apnea include obstructive, central or mixed type. Obstructive sleep apnea (OSA) is diagnosed when there is repetitive collapse or obstruction of the airway resulting in oxygen desaturation (hypoxemia) and/or disturbance of sleep (arousals [15 seconds]) resulting in sleep fragmentation and non-restorative sleep. OSA is the more prevalent form of sleep apnea that is felt to be under-recognized in the general population. Central sleep apnea (CSA) is less common and occurs when there is temporal failure of the physiological mechanisms that drive breathing rhythm. This typically occurs with medical disorders (such as CHF), high altitude, brainstem insult or more commonly pharmacologic side-effect from medications that depress respiratory effort (e.g., opioids). Both are diagnosed with polysomnography (see sidebar article, “What is polysomnography?”) with American Academy of Sleep Medicine (AASM) endorsed practice guidelines for treatment.1,2

Animal and human studies have shown that sleep-wake cycle disturbances may alter neurotransmitters and receptor systems, neuronal activation and related signaling molecules, as well as physical functioning, mood, cognition and behavior.3-6 Zunzunegu and colleagues demonstrated the moderating effects of sleep on several endogenous brain repair mechanisms in an animal model of brain injury.7 Following lesion placement, an experimental group was deprived of sleep during recovery and performed significantly worse on behavioral tasks (a proxy for cognition) compared to a control group allowed to sleep during recovery.7 Following autopsy, the group deprived of sleep had significantly lower amounts of indices of brain repair including axonal sprouting, synaptogenesis, and vasogenesis compared to the control group allowed to sleep.7

In a review paper on sleep and TBI, O’Hara, Zeitzer and colleagues proposed that in addition to sleep loss and fragmentation, sleep apnea may also be associated with hypoxemia that may contribute to the early neurodegeneration observed in those with TBI.8 The benefits of continuous sleep were highlighted by a recent animal study showing insufficient sleep lead to greater accumulation of beta-amyloid proteins and other neurotoxins, associated with neurodegenerative disorders.9 In this study, decreased beta-amyloid proteins were found during continuous sleep due to the glymphatic system expanding space around neuronal structures to increase flow of cerebrospinal fluid to flush out toxins accumulated during waking hours.9 Collectively, chronic nightly hypoxemia and frequent arousals and awakenings (disturbing the continuity of sleep) due to cessation of breathing in sleep apnea reducing total sleep time may serve as mechanisms to explain earlier cognitive decline at younger ages in chronic TBI relative to persons with non-TBI.8 These mechanisms may contribute to the worse cognitive outcomes observed for those with sleep apnea and TBI.

Studies conducted on large samples demonstrate that the ill-effects of sleep apnea were detectable several years prior to the clinical diagnosis being made and are associated with behaviors which increase the risk of TBI including work injuries and motor-vehicle accidents.13,14 For example, Young and colleagues conducted a national survey with 913 non-clinic based, employed individuals and reported severe sleep apnea was associated with a 7-fold increased risk of multiple auto-accidents in the five years prior to diagnosis.14 One Canadian study attributed 810,000 collisions and 1,400 fatalities to sleep apnea for a total cost of $15.9 billion.15 When the indirect costs are considered, expanded sleep apnea screening and APAP treatment have the potential to save billions of dollars.16-18 These findings are consistent with a recent white paper commissioned by the AASM entitled “Hidden Health Crisis Costing Billions,” which summarized the economic impact for all stakeholders.19 Highlights include the economic impact of sleep apnea in a single fiscal year in the United States. Modeling estimates of the cost of obstructive sleep apnea (the more prevalent form) diagnosis and treatment was 12.4 billion in the general population in 2015. However, the burden of undiagnosed obstructive sleep apnea was 149.6 billion in 2015 primarily due to lost productivity, absenteeism, costs of comorbidities due to OSA sequelae (e.g., hypertension, cardiovascular disease), motor-vehicle, and workplace accidents. They estimated that the cost to diagnose and treat every U.S. Adult with undiagnosed OSA would be 49.5 billion; however, it would result in a projected savings of 100.1 billion dollars.19 These findings are key in arguing for improved access to diagnostic and treatment modalities in our healthcare environments including rehabilitation settings.

Why is Sleep Apnea Prevalent in TBI?

The increased risk for injury associated with sleep apnea may explain the higher incidence in TBI. Epidemiologic studies support that sleep apnea may serve as a comorbidity that increases risk for TBI.20-23 TBI can also affect the control of breathing during sleep. As studies show a preponderance of OSA after TBI, neurologic alterations in pharyngeal muscle coordination could contribute, considering the prevalence of various forms of dysphagia after TBI. Alternatively, medications commonly prescribed after TBI could influence the occurrence of sleep apnea. Sedatives, hypnotics, opioids, and other drugs with muscle relaxant properties might alter the pliability of the hypopharyngeal musculature and/or the central nervous response to obstruction. This has the possibility of increasing the risk for sleep apnea though two prior studies examining TBI in acute rehabilitation settings did not find an association between medications and sleep apnea diagnosis.10,11

Sleep apnea is associated with poor physical health, impaired cognition, depression, and dementia. Multiple nightly stresses on the heart and brain are associated with systemic hypertension, atherosclerosis, increased insulin resistance, and increased risk of cardiac arrhythmias, heart attack, and stroke.20-23 Sleep apnea has been identified as a significant risk factor for stroke, independent of hypertension.21 In addition, individuals with sleep apnea are more likely to have poor physical health resulting in increased resource utilization and medical cost compared to matched non-apnea patients.24-26 Stresses on the neurological system may explain the well-established impairments in memory, sustained attention, and emotional disturbances including depression.24 There is growing evidence of early cognitive decline following sleep apnea diagnosis with a recent large-scale epidemiologic study in Taiwan demonstrating a 1.7 times greater risk of developing dementia within 5 years of diagnosis compared to non-sleep apnea controls matched for age and gender and adjustment for other common covariates (e.g., hypertension, hyperlipidemia, stroke, diabetes).27,28 In sum, the negative consequences of sleep apnea across health, functioning, disability, and economic outcomes are well documented and may contribute to chronic health outcomes following TBI.15,16,29-31

To date, only Wilde and colleagues have compared a sleep apnea group (n=19) to a non-sleep apnea control group (n=17) in the post-acute stages of TBI recovery and found significant differences in concurrent memory functioning and sustained attention.31 The effect of treatment on outcome was not examined. Limitations of this study included the cross-sectional design, mixed injury severity, and correlational nature of analyses. Our own data from Veterans and service-members with TBI reveal that sleep apnea is among the most common sleep disorders in consecutive rehabilitation admissions, consistent with civilian samples.10,11 The differential effect of sleep apnea on post-TBI cognition is consistent with the theoretical model proposed by O’Hara, Zeitzer and colleagues that sleep apnea is a potential mechanism for persistent cognitive dysfunction after TBI and early development of dementia.8 As such, the chronicity of sleep apnea after TBI is a critical gap in knowledge that can inform clinical management to possibly mitigate the contribution of sleep apnea to poor chronic health and outcome in TBI.

Leveraging the existing TBI Model System (TBIMS) partnership, a new study funded by the Patient-Centered Outcomes Research Institute (PCORI) is underway to promote earlier diagnosis and management of sleep apnea in neurorehabilitation. When completed, the six center PCORI-funded study, Comparison of Sleep Apnea Screening and Diagnostic Tools (C-SAS) will identify the best tests for screening and diagnosing sleep apnea in moderate to severe TBI in-patients undergoing neurorehabilitation. See sidebar article on different types of polysomnography. The combination of early diagnostics and longitudinal data available in the NIDILRR and VA TBI Model Systems will be an invaluable research resource to answer many important questions about the long-term effect of sleep apnea in TBI. To date, the Agency for Healthcare Research and Quality has published 44 Future Research Needs Papers32 and two address sleep apnea diagnosis (Paper 11)33 and treatment (Paper 12)34 as high priority future research needs.

Treatment of Sleep Apnea Improves Outcome in the General Population

Positive Airway Pressure (PAP) therapy is the American Academy of Sleep Medicine’s first line of therapy for sleep apnea; however, noncompliance can be up to 55% in the general population.35,36 Medicare arbitrarily defines the minimum criterion for treatment as 4 hours/night for greater than 70% of nights.36 Sustained use of PAP has been shown to slow deterioration of cognition, preserve sleep quality, and enhance mood in older dementia patients with sleep apnea.35 A dose-response relationship has been demonstrated between treatment and outcomes in non-TBI sleep apnea.37,38 Partial exposure to PAP enhances outcomes relative to no treatment.37,38 Patients who used PAP at least 4 hours/night showed a variety of positive outcomes: lowered blood pressure, better cardiovascular disease risk profile, better insulin resistance profile, and reduction in markers of inflammation and oxidative stress.39

Non-adhering patients do not experience these beneficial outcomes.38 At the time of this article, the American Academy of Sleep Medicine posted updated guidelines for public comment40 that have a strong recommendation for educational interventions when initiating positive airway pressure therapy.

Ultimately, treatment of this comorbidity after TBI may help improve outcomes at a cellular and functional level unlike management of other comorbidities which could change the trajectory of both acute and chronic outcomes after TBI.

Risa Nakase-Richardson, PhD, FACRM, is a Clinical Research Neuropsychologist in Mental Health and Behavioral Sciences, the VA HSR&D Center for Innovation and Disability Rehabilitation Research and Defense and Veterans Brain Injury Center at the James A. Haley Veterans Hospital Polytrauma Rehabilitation Center. She is an Associate Professor in the College of Medicine, Pulmonary and Sleep Medicine Section, at the University of South Florida. She has worked in neuro-rehabilitation in both clinical and research capacities since 1998. She is a Fellow of the American Congress of Rehabilitation Medicine and National Academy of Neuropsychology. She has over 70 publications in peer-reviewed journals and over 200 presentations at scientific meetings. She has served as PI or Investigator on 13 grants funded by various federal agencies and private organizations including VA, DOD, PCORI, NIDILRR, and NAN. She is the Principal Investigator for the PCORI-funded multicenter center study entitled, Comparison of Sleep Apnea Assessment Strategies to Maximize TBI Rehabilitation Participation and Outcome (C-SAS) whose investigators provided the informational content for this special issue. Her interests include rehabilitation outcome for persons with brain injury with a more recent emphasis on the role of sleep in management of brain injury. She has established an objective sleep monitoring program using actigraphy and polysomnography in the management of sleep in acute rehabilitation and recently edited a special issue in the Journal of Head Trauma and Rehabilitation on the topic. She supervises trainees in rehabilitation medicine, sleep medicine, and psychology in both clinical and research topics related to post-traumatic sleep disturbances and severe brain injury. Email: Risa.Richardson@va.gov.

Daniel J. Schwartz, MD, is an Associate Professor in the College of Medicine at the University of South Florida and Directs the Sleep Laboratory at James A. Haley Veterans Hospital in Tampa, Florida. His interests are in sleep apnea and its’ impact on outcome. He is currently a funded investigator on VA and PCORI grants examining sleep in traumatic brain injury survivors.