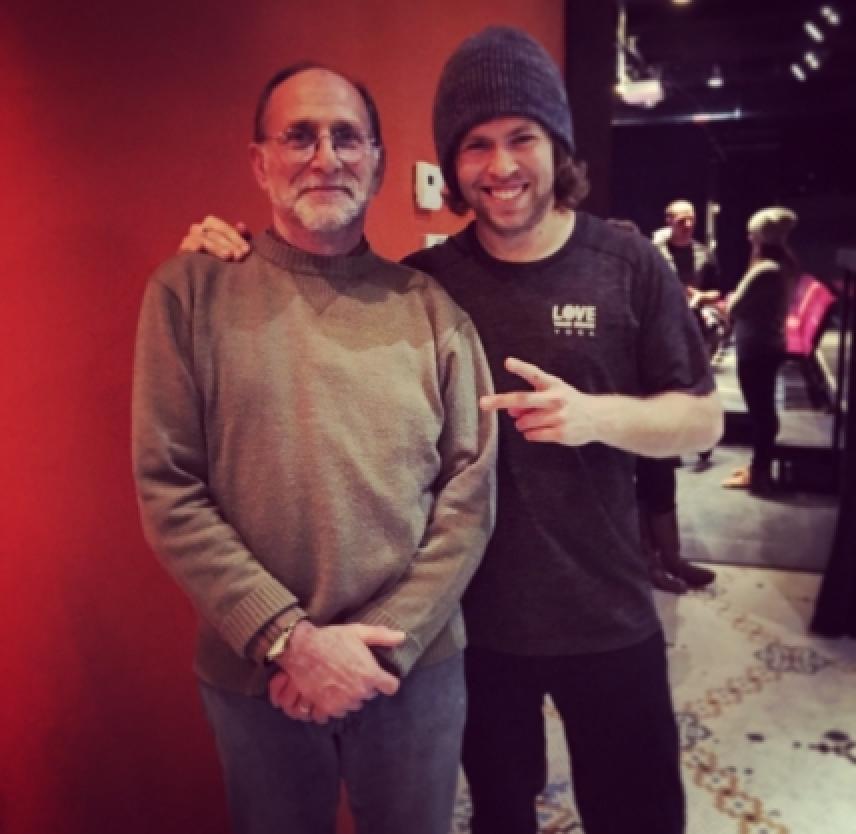 My mind raced. Wow, my left toes are killing me. This sweater is hot. Can people see sweat? I really want to cross my arms, but that’s not sending an open message. Thumbs in my back pockets? God no, that’s too cool. I’ll let them hang by my sides. Good Lord, my arms are long. Why on earth did I wear four-inch heels? Did my dad just say yoga is like exercise?

The words crashed into my stream of thoughts like a freight train.

“Yeah, it’s like exercise—for your body and your brain,” he said. “Ya sweat. Ya think. Ya gotta think about what you’re doing and where you move your body.”

He made some sort of awkward gesture with his arms and the audience laughed. I crossed my arms, my sweater got hotter, and the lights got brighter.

“Yoga is hard,” he continued with his explanation. “It’s especially hard when you have a good instructor.”

He jabbed me with his elbow and smiled, and I felt the wave of relief that we were all back on the same page. All four of us—John and Janna and the Pearce brothers—were sharing our stories of yoga and brain injury under the same spotlight. This was such a big night. LoveYourBrain, Lulu Lemon, and I had officially brought yoga for TBI to a very large Pittsburgh crowd. It wasn’t long before John Leyde and Kevin Pearce were sympathizing with each other over the fact that “their brains lie to them” and congratulating each other on the fact that they had the “best families,” their two narratives, mixing and matching. The moment was surreal. I smiled at the audience. Somewhere under that hot white glow were my mom, my husband, my best friend, and quite a few yoga teachers.

Back when I was a fledgling yoga teacher in New York City, the idea of teaching yoga for brain injury was a big fat dream, a long shot. The summer after I got certified, I picked up free classes for experience and subbed regular classes for a paycheck. On the slow weeks, I’d drive my grandpa’s old Honda Accord home to my parents where I could gradually introduce my father to this practice that I was falling in love with. In time, we were both returning to our mat to learn how to accept his brain injury. Fifteen years later, and yoga was showing him that his injury was not going anywhere, but that he could choose to live with it rather than against it. He could get to know his brain and body now, and stop trying to live like he was still “Old John,” the man from 1996. Fifteen years later, and yoga was showing me how to move past the past and to stop letting it dictate my future. It was time to crawl out from under the fear of my own life—a life so flabbergastingly different from the life I had counted on as a little girl. That year father and daughter were both learning that life on the mat doesn’t bother with the past. Let that stuff go. Yoga was all about getting to know your present so you can shape your future.

While my dad practiced at home, in the living room, shuffling through pages of poses I’d typed out for him, I began shaping my future back in New York. I was determined to share yoga with as many people as I could—particularly those who have experienced what my father, my family, and I had. I was going to figure how to roll out yoga mats for those who lived with brain injury. I read articles. I sent emails. I went to conferences. I researched. I Googled and Googled and Googled to see who else might be doing this. No one. No one?

I moved back to Pennsylvania. My father suggested that I write a book. My mother suggested that I start a class at a rehab center. My Dutch uncle told me to stop attending the conferences and start speaking at them—on yoga, of course. By 2014, I’d taken all three suggestions. That was around the same time that the LoveYourBrain Foundation called me to talk about the yoga for brain injury that I was teaching in Pittsburgh.

Turns out, they’d been Googling a lot, too. After many months of emails and conference calls and plenty of sharing notes, the LoveYourBrain yogis had arrived in Pittsburgh to do one of the first LoveYourBrain Yoga teacher trainings at my yoga studio. We kicked-off the weekend with a Friday evening screening of “The Crash Reel” as a way for my family and the Pearce family to share our experiences with the audience.

The following morning 30 people (mostly yogis, some people with brain injury, a few speech pathologists, physical therapists, and neuroscientists) filled the studio for one of the first nation-wide LoveYourBrain Yoga trainings. For two days, among the mats and notebooks and blankets and coffees, we learned about brain injury, and we practiced yoga. We shared stories and insights, and we drew personal and professional connections between the two worlds. We passed around a squishy fake brain and chatted about neuroplasticity. Together, we mapped out how we were going spread these new brain injury-friendly yoga classes throughout the city of Pittsburgh.

It’s only been a few weeks, and we did it, and there are over a dozen and growing—downtown, South Hills, South Side, North Shore, and more. This March, you can cross any bridge or go through any tunnel and find a yoga class that gives back to TBI in any neighborhood this month. (Want to find one near you, check out the #MindfulMarch classes in every state here.

I’m so proud to be living in a city full of yoga teachers eager to give back to brain injury and spread awareness through their teaching and their studios. I must wrap up this blog with a huge shout out to my yoga community because they are making my dreams come true.

How does one get this in my area? Like Lansing,Michigan?

This is so amazing!  I volunteer with the Victoria Brain Injury Society (vbis.ca)

We do advocacy, referrals, case management, education and send guest speakers.  I'm currently making a connection between VBIS and one of the smaller islands off this island (Galiano).  A friend of mine suffered a severe aneurysm and then a botched surgery and left him quite changed. In the last 3.5 years he's recovered WELL beyond what the doctor's hoped for.  The last time I was over I was asking him how he's done it and if he's told anyone else with ABI how he's managed to recover and keep that process going.  Not yet, no.      So I'm helping start a peer support group on the island (1200 year round residents) and to setup a 3 day series of workshops and discussions, with the help of the local volunteer health care society.

What advice can you give me on how to best approach this?  I want to make it as grassroots as possible, and have put the word out.  I think what will happen is make the link between the two agencies to do one off events, refer people from Galiano to VBIS for case management (etc) from Victoria (it's 1.5 hour feryy then another hour).  And then also create a self help peer support group who can also get help from supporters in the community.  One deals with paperwork, referrals, documenting, and the other deals with the more 'organic' community supports and peer support.  It's the members of brain injury groups that often provided the most useful information to the new members.

How far has your research gone for combining yoga and brain injury recovery?  What kind of results are you getting?

thank you for all the time!

I have tbi and am a yogateacher! I've been also dreaming about it but only found the American page 'Loveyourbrain' and nothing else. I've been training to teach iRest Yoga Nidra and want to set it out for fellow tbi'ers. I really want to connect with you, hope you read this :) There is also a woman in Amsterdam teaching yin yoga for others and is in touch with Loveyourbrain as I know! Would love to hear from you