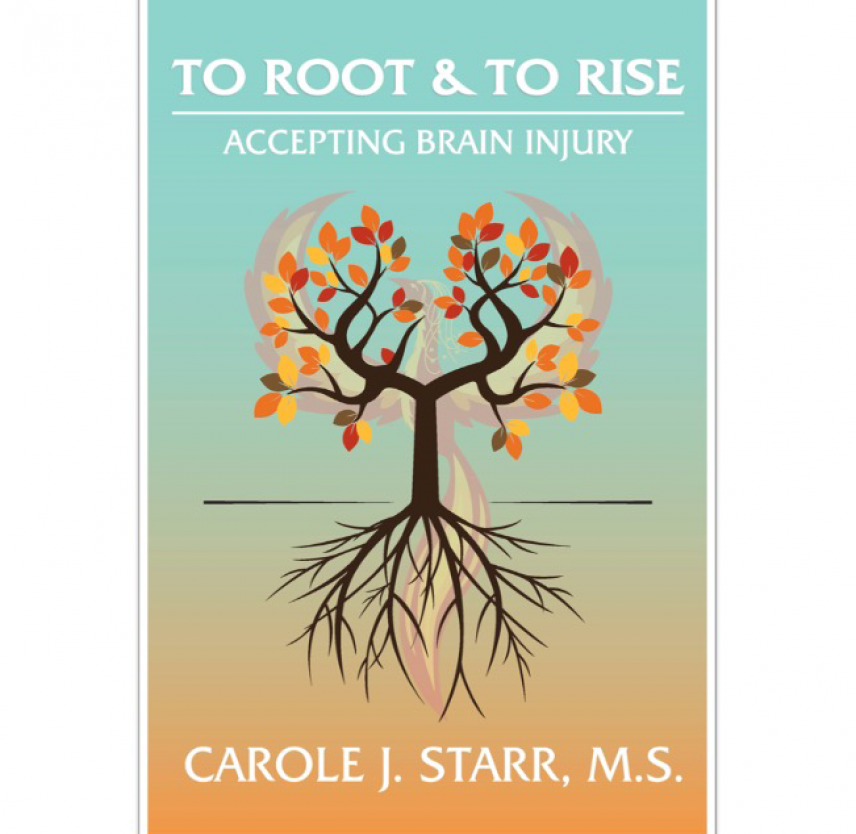 In this 9-part series author Carole Starr shares guiding steps she used to help her accept her “new normal” after her brain injury. Excerpted from her book To Root & To Rise: Accepting Brain Injury.

You never know when life is going to change so dramatically that it shakes the very ground you stand on. My life was uprooted on July 6th, 1999, when I sustained a brain injury in a car accident. That day forever divides my life into a before and an after, an old Carole and a new Carole.

I think we all have identities that we especially cherish, that define who we are. For me, one of those identities was ‘brain’. Above all else, I defined myself by my sharp intellect, quick wit and ability to achieve.

Two activities that brought great joy to my life were teaching and music. No matter where I was, I always seemed to find myself in positions that involved teaching.

Outside of work, I’d been a violinist for 23 years. I played in a community orchestra and I also sang in a chorus. Music fed my soul in a way that nothing else did.

On July 6th, 1999, I was on my way from one teaching job to another when I was broadsided on the driver’s side by a car going about 50 mph. The airbags went off, the windows shattered and my car spun 180 degrees as it was being pushed across the road. I have no memory of any of those things, since I think I lost consciousness at the moment of impact.

It was the physical therapist I saw for the whiplash who suspected I also had a brain injury. My primary care physician agreed that I’d had a mild traumatic brain injury and told me I should recover fully. As I tried to return to my regular life about 6 weeks after the accident, the impact of my brain injury became more apparent.

I was utterly exhausted and my head hurt all the time. It felt like someone was squeezing the left side of my brain from the inside. Sometimes it felt like there was so much pressure in my head that it was going to explode right out the top.

While teaching, I suddenly couldn’t remember my students’ names, something I’d always been good at. I would forget what topics we’d discussed and I lost track of what we were doing. I struggled to follow the lesson plan that I’d written and used many times before. After only two hours of teaching, I would spend two solid days just glued to my couch or bed, too exhausted to do anything at all.

Even the simplest of activities would bring on the crushing mental fatigue. For example, I had to take a nap each day right after my morning shower because it tired me so much. I would be too wiped out to even use the hairdryer, so I would just collapse on the couch with my hair still wet.

I also tried to return to music. When I walked in to rehearsal while everyone was warming up, the jumble of conversations and instrumental sounds instantly overwhelmed me. It seemed piercingly loud. Once the rehearsal started, I lasted about five minutes before the sound reduced me to tears and I ran from the room. I spent days on my couch recovering from just a few minutes of music. It seemed like the ultimate cruel joke to curse a musician with an intolerance to sound.

I also struggled with basic life activities. At the grocery store, I would stand in the produce section for long periods of time with an apple in each hand, unable to figure out which one to put in the bag. For some strange reason, I became fixated on cottage cheese and that was what I ate for dinner most nights. I’d always loved to read, but I stopped reading the paper and magazines and books because it was so hard to focus, pay attention and remember what I’d read.

Family gatherings suddenly became unbearable. I had a hard time holding a conversation, especially if more than one person was talking or there was lots of background noise. I tried to hide just how little I was able to comprehend and remember. My speaking was slow and halting and I’d lose my words.

I felt so alone, like a stranger among the people who knew me best. It was like I’d lost my place in my own family. As a grown-up, independent woman, I was embarrassed by how much assistance I needed from both my family and my friends. I felt that I was a burden to everyone and a failure as an adult.

My emotions were no longer within my control. I overloaded and cried a lot—over the strangest of things. I sobbed hysterically during sappy commercials on TV, if plans changed unexpectedly and when a bumblebee flew into my house. I wondered if I was losing my mind.

I kept thinking that if I just tried harder or pushed more, I could make the symptoms go away by sheer force of will. I’d always been someone who believed that anything is possible if you just work hard enough. For the first time in my life, that was no longer true. The harder I pushed, the worse everything got. I blamed myself for not trying hard enough, for being weak, for being lazy, when none of those judgments were true.

I tried over and over again to return to teaching and music, but each time I failed. Eventually, I had to stop both. My life was reduced to medical appointments and four naps a day. I’d become someone I didn’t recognize anymore, someone I absolutely hated. ‘The brain’ was no longer an identity that described me. Every day was a struggle to function at a basic level.

As it became clear that the old Carole was gone and a new Carole had taken her place, the grief over all I’d lost was overwhelming. It was the most intense grief that I’d ever experienced, worse than grief from the loss of loved ones. This time it was me who had died. Even though I survived my car accident, I had lost my sense of self. I thought the grief was going to break me. There were numerous times when I thought seriously about ending my life.

It took me eight years and much help from family, friends, other brain injury survivors and medical professionals to come to terms with the new Carole. Accepting my life as a brain injury survivor was the greatest challenge I’ve ever faced. There were many, many times when I thought I couldn’t do it. But I did learn to accept brain injury and to like myself again. I’ve gone from being uprooted by brain injury, to putting down new roots to rising into this changed life and finding a way to soar. My life is very different than I ever thought it would be, but it is again filled with meaning, purpose and joy.

Learn some of the strategies Carole used to help her craft a new life after her brain injury.

To hear Carole talk about these steps, you can watch this short video clip.

Next article in the series: Get to Know Your New Self >

To Root & To Rise is available as a print, e-book, and audiobook. Please visit Carole Starr’s website for more information.