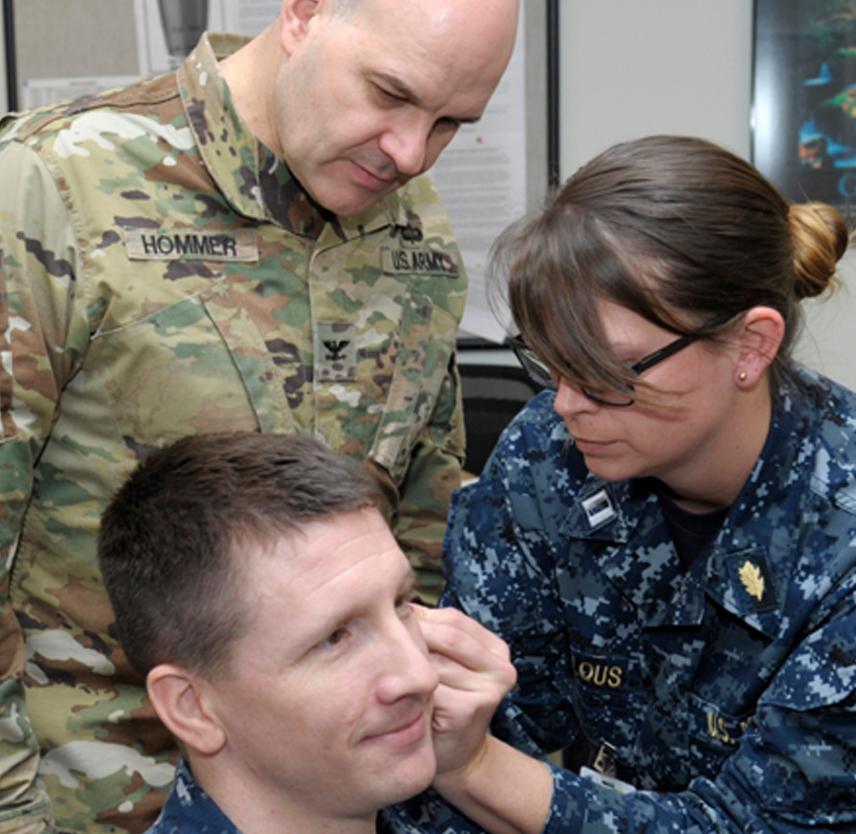 Retired Air Force Col. Arnyce Pock spent most of her 34 years on active duty as a board-certified internist. But a traditional medical practice from another part of the world is energizing and informing her work as associate dean for curriculum at the Uniformed Services University of the Health Sciences in Bethesda, Maryland.

That practice is acupuncture, the ancient Chinese technique of inserting thin needles into the skin at specific points on the body, with its most common purpose being pain relief. Pock is among an increasing number of Military Health System professionals advocating for acupuncture to complement conventional Western treatments, including those involving opioid medications.

Pock said acupuncture offers pain relief without the costs, potential side effects, and addiction and dependency issues associated with opioids, which act on the nervous system to relieve pain.

“We still don’t have a totally clear understanding of how acupuncture works,” said Pock, who’s received formal training in medical acupuncture. Some patients may need only a single treatment, she said, while others may need several.

“It should also be noted that while acupuncture can work quite well for a wide range of conditions, it isn’t necessarily the best treatment for everyone, or for every condition,” Pock said. “But there’s growing recognition that acupuncture has a role in helping patients, especially those suffering from acute or chronic pain.”

Pock said pain management is a common reason for acupuncture, “but it can be highly effective in treating a wide range of conditions,” including symptoms associated with traumatic brain injuries, such as depression, anxiety, insomnia, and headaches.

Acupuncture won’t necessarily erase all pain, agreed retired Air Force Col. Richard Niemtzow, a radiation oncologist who developed the technique known as battlefield acupuncture, or BFA. “But it’s another tool with very little, if any, risks or side effects,” he said. “That’s intriguing.”

With BFA, very small needles are placed at specific points on the outer ear. The needles fit under a helmet and stay in place for two to four days, providing extended pain relief.

“The whole idea is a rapid technique that’s simple to use in all types of pain,” said Niemtzow, who treats patients at the Air Force Acupuncture and Integrative Medicine Center at Joint Base Andrews, Maryland.

In 2014, DoD and the Veterans Health Administration launched a joint project to teach BFA to a variety of health care providers including physician assistants, nurse practitioners, and physical therapists.

“Treating pain is one of medicine's oldest and most fundamental responsibilities, yet modern medicine continues to struggle in its efforts to understand pain mechanisms and to relieve pain and suffering of our patients,” said Army Col. Jason Wieman, the Fort Belvoir hospital director and a family medicine physician trained in acupuncture.

“Acupuncture really works,” he said. “I treat an average of a dozen patients per week with acupuncture, and I’ve used it personally. It’s a great tool for pain relief, and a great asset for our providers to have at their disposal.”