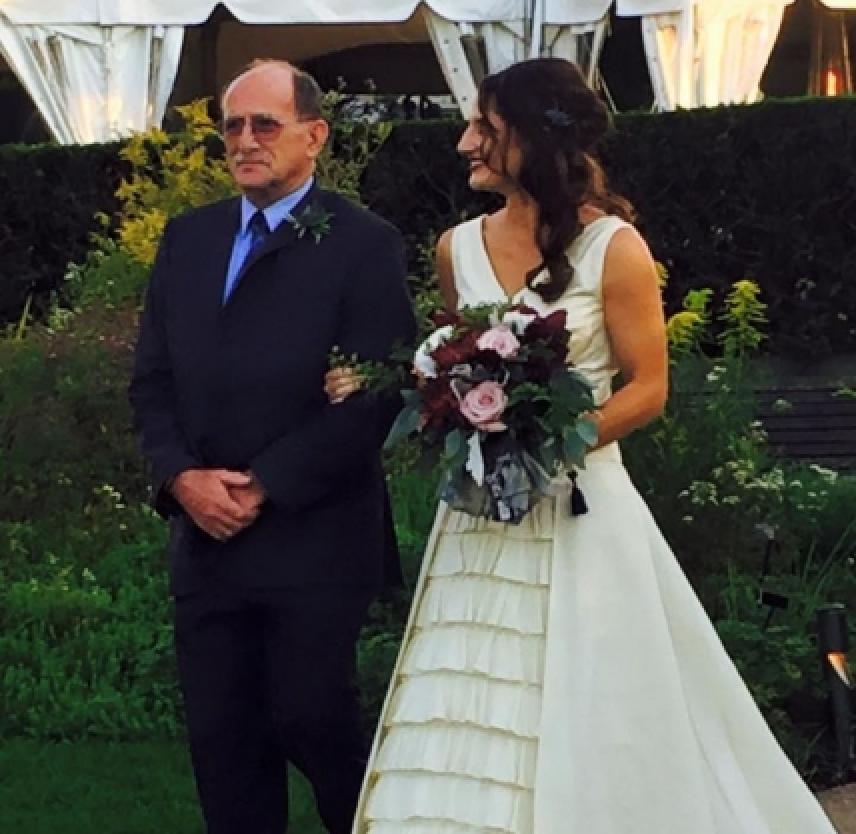 “Don’t even think about walking me down the aisle. Don’t even be there! Do not come to my wedding! I hate you.”

I said those words eighteen years ago. I was fifteen, standing on the basement steps of our lake house, looming over my father with tears and snot dripping down my face. I still remember every feeling—the skin of my fingers pressing into the knots on the wood of the wall, the scratchy Berber carpet under my toes, the sensation of lead filling up my throat that comes with the rise of a panic attack.

I could be such a jerk, but 1997 wasn’t a good year. It was the first year of my dad’s brain injury. He was nasty. I was nasty. He said and did a lot of things he doesn’t remember. I said and did a lot of things that I can’t forget. I don’t regret much, but I certainly regret telling my father that I hate him and that he can’t come to my wedding. Of course, I’d want a wedding where all my friends and family watched my dad walk me down the aisle. That’s what dads do, and I had an exceptional dad who happened to have a colossal brain injury.

Over the next decade or so, I would witness dozens of my friends’ weddings, and every time I saw a dad walk a daughter down the aisle, I would feel the pangs of sorrow and rage from that day all over again. Those words stuck with me as if they have been branded somewhere on my brain. What I said to him had hurt, and man-oh-man did I ever want to hurt my dad’s feelings back then. I was disappointed by life, and my faith had been shattered. It took many, many years for anything to make sense again.

It was Sunday—less than a week before my wedding. OH BOY!

You never know what you’ll get when my dad emails—sometimes a paragraph, sometimes a joke (not always politically correct) or a link to an article in our local newspaper about yoga, and sometimes nothing but a subject line. That week, he was all about subject lines, because he was doing a better job than anyone of counting down the days until my wedding. He loves Chad. I love Chad. Chad makes sense, so there I was once again eating those words as I planned out our ceremony. Do I walk down an aisle? Do I walk down with both parents? Will my mom even want to? I kept wavering: maybe just my mom and me because we’re a good team. No, all three of us. Maybe, I don’t know.

Keep in mind that there haven’t been too many moments in my past where I’ve had to ponder who is actually going to walk me down the aisle. Some years I was sure I was off the hook because a marriage just wasn’t in my cards. But the wedding was a week away and, I had to make a decision. So I did what I do best, I made a 96% certain decision, and then I texted my mom.

“Do you want to give me away with Dad?”

She told me it was up to me, which is exactly what I knew she would say. So I told her I cared about what she wanted because she is important to me. Not to mention, Chad and I were doing quite a few things untraditionally. Two parents walking their one kid down the aisle couldn’t be that off base, right?

“Or is that weird?” I texted her again after my wishy-washy answer.

“I think he should do it,” she answered me back. “It’s a big deal for him and his roles to play are limited. And he has a new suit!”

In a moment that felt like magic, I realized how my mom and I were on the exact same page about all of this. I was 100% certain of what I wanted to do, so I texted her.

“Yeah! I want you to, but I feel like this is something I can give to him. This is something that can be just as we pictured when not much else is. Does that make sense?”

Thanks for sharing this very personal story that was rich with emotions from that first year to the decision about your wedding day.  I wept as I read this.  ; and I think of how LOVE conquers all.  God Bless you!

Oh my dear Janna, You have become this compassionate, amazing, heart warming, loving young women. I'm so proud I can call you my friend. So happy for you that Chad came into your life.

Yep..that's what my cousin wld say. All was perfect.

I've read ur books and I have a 10 year old daughter who is having a rough time dealing w her TBI step dad. I hope one day she can get to where u are w ur dad. Its inspiring, and gives me a little hope for the future. Thank you, and for the record, I think u made the right decision. :)

Thank you. I am happy for you and your dad and mom. I hope this does not happen to me. I'm a mom with three boys. It's been 11 months ago I was hit by a tractor trailer from behind while stopped at a red light. My life as I knew it ended at 11:41 that day. I sustained a mTBI and am with Postconcussion syndrome. I don't remember much of the past year. I am trying hard to maintain my relationships with my boys. Thank you for your gritty and honest post. Blessings in your new life.

Perfect sense is right! It's nice to know someone understands. I tortured myself over how to incorporate my TBI brother into my wedding day. I believe I honored him in a dignified way. I have peace about that.

This is beautiful on so many levels! Thanks for sharing and I think you made the right choice!