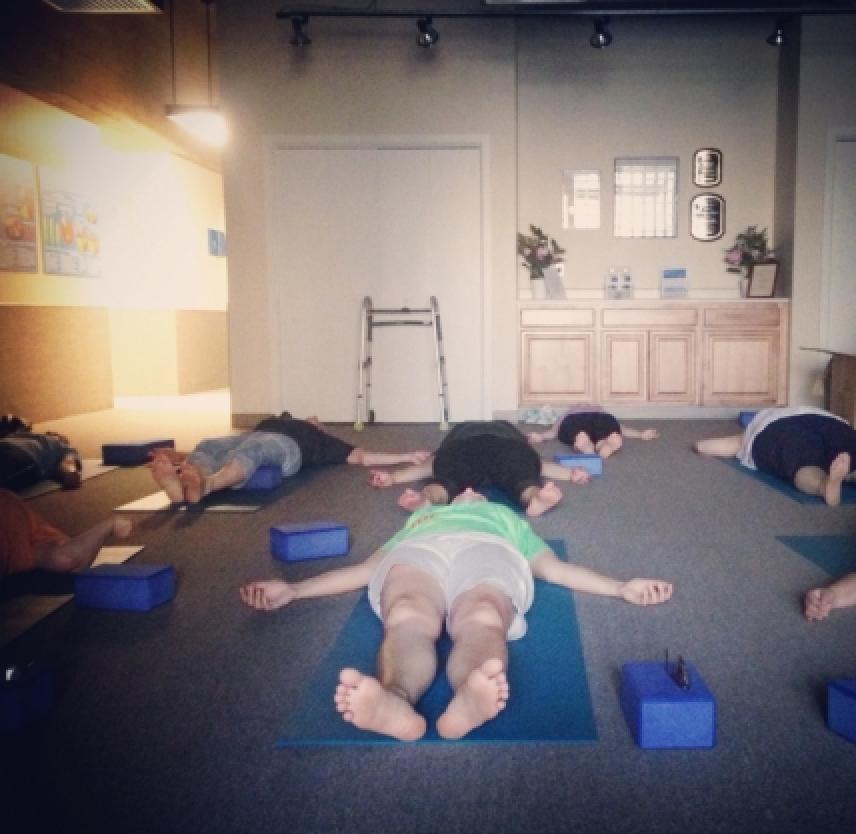 July 30 is either an unlucky date or an auspicious one. I suppose it depends on how we look at it, so when I started the Wednesday evening yoga class at ReMed of Pittsburgh, I chose to see the date of my father’s crash —18 years later — as auspicious. July 30 would be a good day to start a pilot program for yoga and brain injury.

I remember the day I made this my goal — my dream, my thing to manifest. I was sitting cross-legged on the shellacked hardwood floor of my teacher training studio, two stories up from the busy streets of Manhattan with two dozen other Sonic Yoga trainees. We sat in a circle, all of us perched on blankets with our books askew and pens and notepads in hand. “What will your dharma yoga be?” Everyone would take a turn to answer. In other words: How can you be of service? What will you give back through being a yoga teacher? What is your duty? Yoga to prisoners, yoga for my crazy co-workers, yoga for expecting moms. We all had our yoga for… I seriously couldn't wait for my turn.

A four-week teacher training program was challenging. My regular life was on hold. We had been doing, and talking about, yoga morning, noon, and night. It was exhausting — mentally and physically. This training was also unearthing some very buried and very ugly emotions. As if dually writing a memoir hadn’t been enough. There I was, at 29, cracking myself wide open and pretty unsure of what was inside. It wasn’t easy. Knowing my yoga duty… well, that was easy.

“I’m going to teach yoga to people with brain injury,” I said when my turn came. “My father has a brain injury, and yoga will help him…” I continued on with explanation and reasoning as to why the professional worlds of yoga and brain injury must meet.

That was April of 2011. A few months later, I started teaching my father. I researched and saved bits and pieces of things that might someday be relevant — or maybe become a book*. Then I took a break to finish my memoir and give my dad enough time to reap some of these benefits of the practice we had started.

In 2013, I began giving talks at TBI conferences on the benefits of yoga for those who live with brain injury. In those talks — sometimes rooms filled with close to 100 people — I was able to see what I believed. Four poses, basic ones, and I could quiet the room. Four poses, and the energy shifts. The calm is almost tangible. People breath and smile. People are present. It’s pretty miraculous how much positivity you can eek out by simply moving and breathing. And when it ends, I’m asked question after question about how yoga helps. Yoga is no quick fix or a one-shot heal, but yoga brings about acceptance and acceptance flings other doors wide open. To over-explain it cheapens it, but to experience it says it all.

It wasn’t until I moved from New York to Pittsburgh that I was able to talk to a woman at ReMed, my father’s brain injury Rehabilitation Center, about how the heck to get something like this off the ground. Abby and I met over a Mediterranean meal and both agreed that this endeavor would take time, patience, money, enthusiasm, research, and quite few nudges. A few months later I taught a group of veterans through Pittsburgh’s Wounded Warrior Project. Students slept better, thought clearer and found balance — both mental and physical. Then I began a brain injury and trauma class at a studio where I currently teach. It was all part of my agenda to get yoga and brain injury to meet professionally. As expected, the program, the funding, and the logistics of teaching at a brain injury rehab center took awhile.

On July 30, 2014, I walked into the lobby of ReMed. The waiting room chairs and tables had been pushed aside for the evening to make room for eight yoga mats. The class began in a-typical yoga fashion. There was much talk of shoes on or off (and socks), complaints of brain injury and balance, and lots of sentences that began with I can’t. Eventually, I led the students, with their walkers and their sneakers and their braces and their questions, through a very basic sequence. I offered modifications and challenges for each pose, which allowed them to get to know their brains and bodies. How does my body move? What am I challenged by? Where am I in space? What feels good? There were wobbles and laughs and huffs and puffs. And was I nervous? Yes, nervous as hell. Could I do this? Do they trust me (not the students, but ReMed)? What if someone falls or leaves or yells? When class ended, the Savasana was remarkably quiet. When we all put the chairs and tables back, every student asked when we would do this again.

“You had them doing things I never thought they could do,” said Abby as we walked out together. “It was amazing.”

Every Wednesday since, it’s been amazing. Also, like most things in brain injury, it’s been a bit of a navigation. What’s too much? What’s just enough to learn and progress? There were falls, frustrations, misunderstandings, and misinterpretations, but I have made a difference. I have shown up to teach these students and help each one eek out a bit more of the positive in their lives — lives filled with brain injury, appointments, and treatments, lives that have been turned upside down. I have introduced them to yoga, where time on a mat — brain injured or not — can be respite from the outside world that whirls around us. Time on a mat can teach us where we can find acceptance.

Tomorrow is our last class of the pilot program. This is my dharma, and it’s only the very beginning.

And what a difference you did make in the first Pilot yoga class...thank you!!!

I enjoy reading about your journey. Live your passion. An article of reality!
I think that`s a wonderful thing your doing...Ruth

Congratulations on your program and upcoming book. I suffered a TBI in a car accident 1.5 years ago. As a Yoga teacher, I immediately began putting the subtle practices to work. Meditation calmed me, breathing practices soothed my nervous system, modified hatha strengthened me until I could resume a full practice again. Through it all, I felt so much gratitude and appreciation. May success and many blessings follow you on this path.

What a fantastic difference you are making for a population which is too easily misunderstood, marginalized, and thus disconnected from such proactive health opportunities. As the Director of a nonprofit program named TBIAlive in Colorado which began motivating several yoga studios to teach weekly TBI adaptive classes in 2012, I am excited to learn from and support your experience. Thank you for opening people's eyes to yoga for health and stability post-TBI.