The Magic of Moments 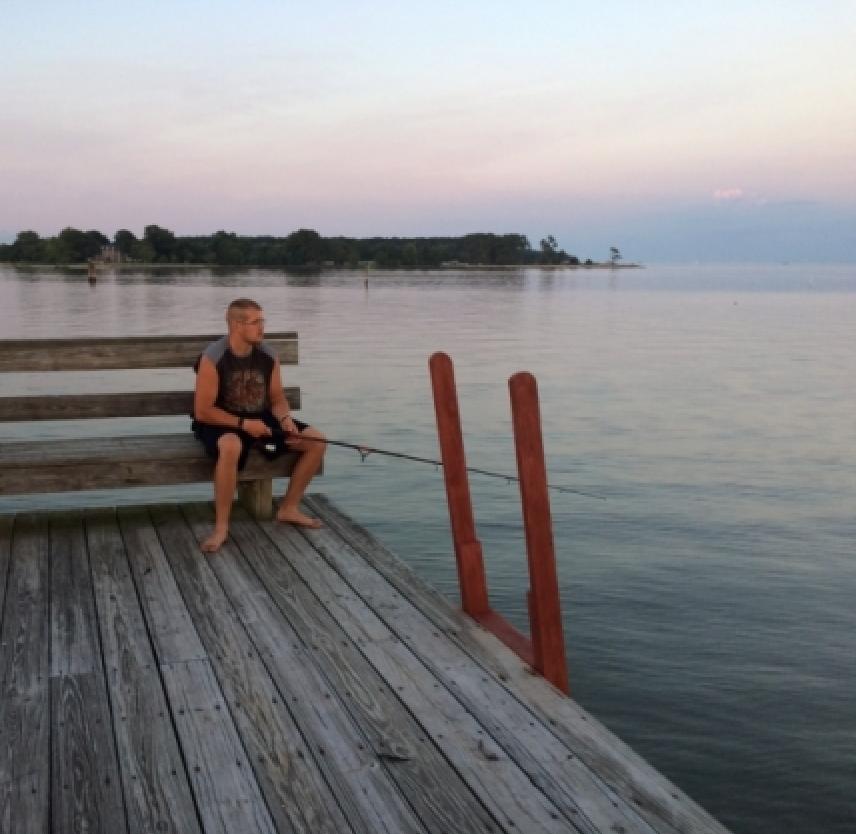 Last week our family set out on an old, but once again new, adventure. The interesting thing about traumatic brain injury is being left with a before and after—lifetimes separated by that one moment that changed everything.

Weeks of organizing, compiling lists, and careful planning were finally complete, and we headed off for our first family vacation in over four years. Kids grow up, parent’s age, and the added complexity of traumatic brain injury creates another layer of complication to gathering in a far away place.

I was excited for us to return to the spot that held such sacred recollections. We drove to the town of Gloucester Point, Virginia, where we found our well loved, weather-worn house on the York River. Driving down the sand covered road, I could see the long pier in the distance—my mind had already been drifting back to the many memories made there.

Friends of our family had allowed us to rent the same home for over twenty years. Sitting on the wrap around porch, while lying on the hammock, summer after summer passed by, and my son’s grew up.

When younger, Taylor most loved fishing off the pier, and would wake at the crack of dawn so he could fish all day and into the night. In between fishing hours, we would all swim in the makeshift ocean pool, comprised of a net, built into four edges of the dock. Having three sons meant the pool wasn’t quite adventurous enough, so we would take long leaps off the pier into the river, laughing, screaming, and having fun.

Taylor was close to twenty years old the last time we were at Gloucester Banks. He told me something on that trip that made me realize that he and I shared the same deep affection for this home away from home. He said, “When I get married, I want to tie the knot here and jump off the pier with my bride!” I recall being touched at the romantic side of him, along with the attachment he held for this spot.

With vivid clarity, I remember that trip. Moments that seemed ordinary at the time now stand out like shimmering drops of water. Taylor was forever sun-kissed at the beach. His skin always tanned perfectly, his bright smile radiated because he was away from the stress of the daily grind. He would effortlessly dive or jack-knife off of the dock, and always create a big KASPLOOSH followed by uproarious laughter. He, his dad, brothers, uncle, grandfather, and sometimes I, would crash into the water below, and unknowingly create memory after memory.

We would become connected to time and space there, under the light of the sun, and even the light of the moon, which was so bright one could see the sandy road without a flashlight. Our family was whole in this place.

Things have changed. People have changed. The houses have been updated, but what has not changed is the heart of this place. The slow, steady call of the shore that says, “You are home.” Traumatic brain injury has taken so much, but there are things it cannot steal.

Taylor is now unsteady on his feet. He tires easily, and the rambunctious noise of a houseful of people stretches his fragile brain. He is prone to seizures and mood disorders and thrives on being well rested and having a routine.

After driving all night, we arrived around six a.m. and Taylor excitedly asked if I was ready to take him fishing at the pier. My body said no way, but my heart said, yes. I begged for a brief nap, and he complied.

Later, at the bait shop, we were greeted with every Southern endearment imaginable. “Sugar, honey, darlin’, and sweetheart” rolled off of the cashier’s lips into our tired ears, as she was immediately drawn to Taylor’s gentle nature.

Taylor shared what happened to him—telling his version of his fall down 13 stairs, the coma that kept him in a cocoon, and some of his recovery. The cashier paused and then told me, “I had a friend who fell like that and subsequently died.”

Traumatic brain injury steals lives, not just bits and pieces of someone’s mind. She was amazed at Taylor, which made him swell with pride.

That day and the following days quietly unfolded, or sometimes not too quietly in a house filled with people ages two to 78. Taylor was exhausted, elated, and truly enjoying being in each moment. He went fishing, taught the kids among us how to bait their hooks or reel Mud Toads and Croakers in. He caught crabs and more.

Taylor had my dad drive him to the home of an old fishing friend, knocked on the door, and then proudly asked, “Do you remember me?” You could see the memories unfolding one by one, like the tiny grains of sand surrounding us. Taylor was reconnecting not only with a place, and not only with his family, but also with himself.

The highlight for me came on the second to last day of Taylor’s stay. Taylor’s brothers, who are both younger than Taylor by a couple of years, were out on the dock and decided to take the giant leap off the pier into the water. After their landing, they began the brotherly prompting of challenging Taylor to jump. Before we knew it, we were all counting down, “One, two, three…” and watching Taylor cannonball, leap off or jack-knife into the water below. Each time he resurfaced with a new found joy and determination. My husband and I grinned from ear to ear, each fully understanding that there was undeniable magic in that moment and despite all of the heartache and pain, we could still find joy.

Thank you for sharing a piece of your story in the life of traumatic brain injury. I love that you could revisit this special place and that it brought joy to you and your family. ♡
So glad for yet another amazing trip down memory lane!
My daughter is 8 and last Dec (10 days before Christmas) was in an automobile accident with my ex-husbands girlfriend. Gracie sustained a traumatic brain injury along with several broken bones and a collapsed lung. We spent a month at Children's Hospital. Gracie had to relearn to do everything. It was amazing to watch and heartbreaking at the same time. To look at her now you might not notice the difference in her, but I do. TBI....I hate those 3 letters. Thank you for sharing your story...Taylor's story...It has helped me with no feeling alone and not feeling bad for feeling some of the emotions that I feel.
Very nice to read a little bit of Taylor's fun times and yes TBI . After 2 years my husband and I tried to rent a camper and have fun like old times. But being the TBI, I could not fill the camper, it was over whelming. A flood of stuff, my routine was hard to find. My anger was coming out. It was so hard to do a simple task, I became a monster. Once we were ready. Off to the favorite camp site. I was over whelmed. I was not in my structured situation I was use to. We had the worst vacation ever, sad to say. We shared this with my therapist And that is when they said, I can't handle change, it's flooding my brain. Oddly enough she was right. Change in my schedule was something I had to learn, to change schedule. So for over another 2 years I am finished with a routine therapies. I can handle some change, better. However we have not tired it again. We have many doctors visits elsewhere, or appointment here and there. Life is a struggle, but I hang on and hope not to become a monster, I need rest. I have head pain every day. So a nap or down time (quietly), I then can do things. Stores, car lights and background noise is too much. Well it's a new way of living life Thank you sharing, Gailann