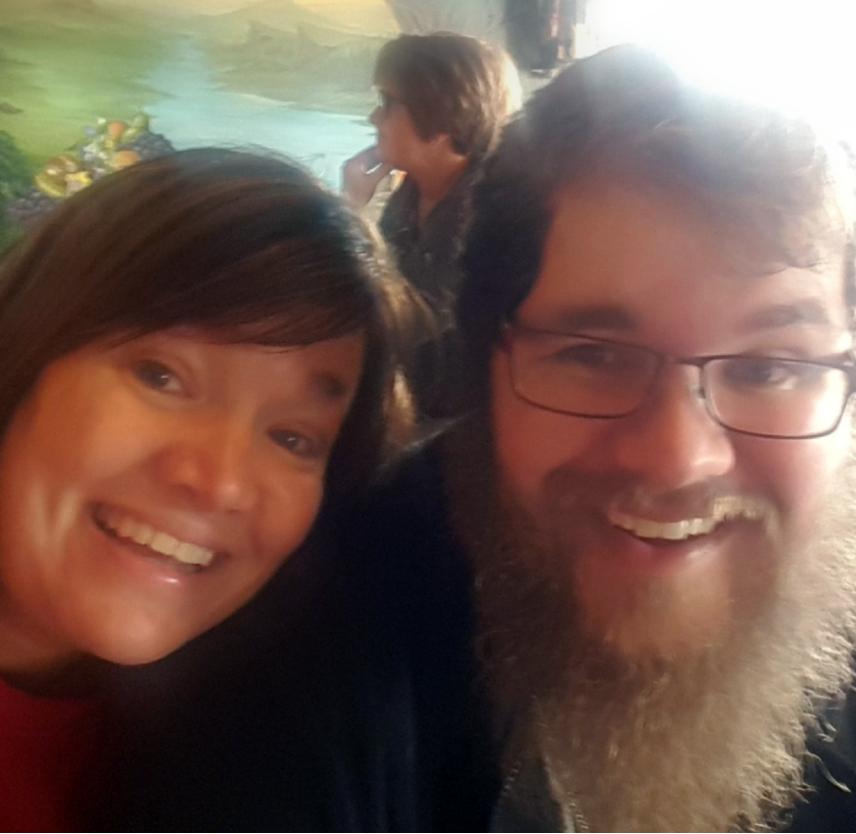 I recently purchased a pair of earrings … a caterpillar and a butterfly. They represent my process of evolving in several ways. Perhaps the most profound progression is in my role as both caregiver and mother to a traumatic brain injury survivor.

Six and a half years ago if someone would have asked me, “What is a caregiver?”, my answer would have been categorically different than today. My response might have lacked deep emotion, great sadness or anything particularly noteworthy. I understood caregiving to be challenging, but I did not comprehend the depth of commitment to survivor and self required. I did not value the importance of holding an empathetic space for the daily process in which survivors and caregivers participate.

Taylor’s accident occurred in November of 2012. The following April he returned home. It wasn’t long before the stress of caregiving surfaced. I was still on leave from work and Taylor’s ongoing recovery was my focus. My days were exhausting. And at night I often found myself drowning in the disparity of our scenario.

Along with the drowning, I was missing Taylor. Still wondering where he was in all of this. The concept of ambiguous loss had not been introduced to our family. I had to keep going. There was no time for pause, curiosity, or feelings and certainly not the time for thoughtful reflection.

Taylor was showering the first time he entered a grand mal seizure at home. He and I were alone, his nurse having just left. I ended up catching him as he slid to the floor. I was literally pinned underneath his body, and it took me a few moments to get him situated before calling the nurse. From the onset of the seizure, until the nurse returned, I felt certain Taylor might die.

I was surprised by my composure. Outwardly I comforted myself by simply breathing and repeating, “Everything is going to be alright.” Inside was a different story. My mind was battling a firework display of emotions. I wondered if Taylor had come so far, only to die on the bathroom floor.

This was at the beginning of my caregiving journey. Every day brought something new. My inexperience showed. I felt highly sensitive, emotionally raw, and on display. I was the mother whose son had a brain injury, and I barely grasped what those words meant for myself, much less anyone else.

I was swimming in a pool of confusing grief, self-blame and wanting to somehow be enough for the community helping us. It was intense pressure.

I wanted someone to tell me, “Everything will be alright”, although if they had, I wouldn’t have believed them. I was learning the cruel lesson that sometimes things are far from all right. And even then we must go on.

As days turned into months, it was hard for me to track my own evolution. But growth was taking place. I was wading through the murky waters of grief, but I was getting somewhere. The feelings of being trapped in circles of black despair and heaviness were part of the process. As was moving through them.

I felt a sadness I cannot equate with anything else previously experienced. There was a desperate ache within the soft marrow of my bones to return to our before. There were times I begged the clock of the universe to rewind. This had to be a dream. I now know it wasn’t.

There was anger, much of it self-directed. It was hard to outwardly express my rage at what had taken place… so instead I placed it on a platter and served the poison it emitted to myself. This had to be someone’s fault, and for an excruciatingly long, lonely time, I believed I had somehow caused this cataclysmic event. In hindsight, those destructive thoughts almost buried me.

With time I found my voice. I shared with the safest, most trusted members of my tribe the turmoil I was in. I cried a million tears. I screamed until my throat was raw. And I said out loud, “I can’t do this. I miss my son. This is my fault.”

This
is
not
your
fault.

Those who loved me said the words I needed to hear as often as they needed to be repeated. For that I will always be grateful.

Years two, three, four, and five passed. Within each one of those years I was restructuring my own shattered heart, while attempting to help Taylor do the same. I also had two other sons, a husband, friends, and family to love and to be present for.

I experienced times of great pride and jubilation when Taylor accomplished something new. And I had times of daunting frustration and the feeling of being stuck a the painstakingly slow scenario where the rewind button is pressed again and again, as we revisited the same issues day after day.

Now there are days when I stand in absolute awe at how far Taylor has come. And there are days my jaw still drops at the ongoing cruelties of brain injury. This is all part of what being Taylor’s mother means. It is part of being his caregiver, too.

I have learned to respect and honor my process. I know every brain injury is different, as is every survivor and caregiver. I have learned to accept together we will experience beautiful triumph and heartbreaking defeat. And sometimes the triumph is simply surviving the day.

I imagine caregiving will be a lifetime of growing, self-discovery, and evolving. Sometimes the process will be lovely, full of strength and courage (the butterfly times.) And at other times I will become a caterpillar again, covering my emotions in protective casing as I work through trying to figure out what all of this means. I don’t know that I will ever fully become. But I do know each stage plays a part in our healing.

I am a mother. I am a caregiver. I am an incredibly resilient human, and so is my son.

Thank you for sharing. I we are at 11 1/2 yrs of my son's brain injuries. Yes he's had several since his intial one on 12/10/07. At first he made great strides even after they removed 3/4 of his left brain due to MRSA. His skull on left side crumpled when they removed it so he was left without protection of his brain for 5 yrs. That's when the grand mal seizures began every time he'd have one he'd be taken by ambulance to ER then put in a medicated coma for 5-7 days. Still he could walk and speak a few words, he could make his own coffee, use the microwave, I could see parts of my son. Until the day he had surgery to put an artificial skull cap in to protect his brain, after surgery he wouldn't wake up it took them 7 hours before they did a scan to find out he'd had a major stroke! It took 3 weeks for him to come out of his coma and another 6 months in a nursing home before I could bring him home. Anyway, that stroke did more brain damage then anything else his brain suffered. He uses a cane falls an breaks bones once or twice a yr, can't really speak when he does u can't understand him. It's almost like he's a walking shell. I fear what will become of him when I'm gone. No one has enough patience to care for him like I do. He refuses to use the toilet so there's a lot of diaper changing. I now have so many feelings churning inside I sometimes feel paralyzed! I'm scared, I'm tired and I'm frustrated.

Gina, I am so sorry. I hear you. I feel the ache in your words. I am rooting for YOU...sometimes we can simply resolve to find an ounce of hope. Thinking of you. ~ Nicole

You said so perfectly my thoughts and feelings that I have been unable to express. My son suffered a TBI 7.5 years ago in an automobile accident. He was 27 years old and in medical school. He spent 6 weeks in a coma 6 hours from our home. We had him flown to our home town for a another 6 weeks at a facility specializing in TBI and then another 6 weeks at a local nursing home. He is doing well considering. But not the man we was. He is well enough to be aware of his deficiencies and is so depressed. He looks at his brother who is well and says "I want what he has: a wife, children, a career, friends - and it will never happen." It breaks my heart. He is able to live on his own. But whenever I spend time with him, my equilibrium is off and I plummet into my own despair. thank you for the blog and I appreciate the second response that was written. I feel edified.

I am so sorry, Nancy. Wow. It is very hard. Thank you for sharing. With love ~ Nicole

Thank you for sharing! This was such a great post!

"We rise by lifting others"...and your words lifted me. Thank you.

Some people are created and remain as they are, simply changing and aging in the process of life. They face the daily challenges of their existence, growing and learning at their choice and desire. You, on the other hand, are being asked to evolve and develop, to mature, change and constantly improve. You're required to provide, support, guide and maintain, to love and accept beyond your means, each day without rest. What you have been able to accomplish, on the good days and those not so successful, is, by most standards, considered Superhuman. I have worked with ABI and TBI survivors for over a decade and realize first hand the magnitude of your efforts, as well as the evolution that has taken place in your life, and that of your Family. Each day as you care for Taylor you emerge from your cocoon, an example of delicate beauty more special then the previous one, by virtue of your selfless devotion to his needs. Remember that there will be a time that we will all be accountable to how we treated those in need, and the least of these. At that moment you will hear the words "well done my faithful, loving, caring and magnificent Butterfly"

Andrew, that is one of the most beautiful and compassionate replies I have ever received. Thank you for this most gentle and loving reminder. ~ Nicole