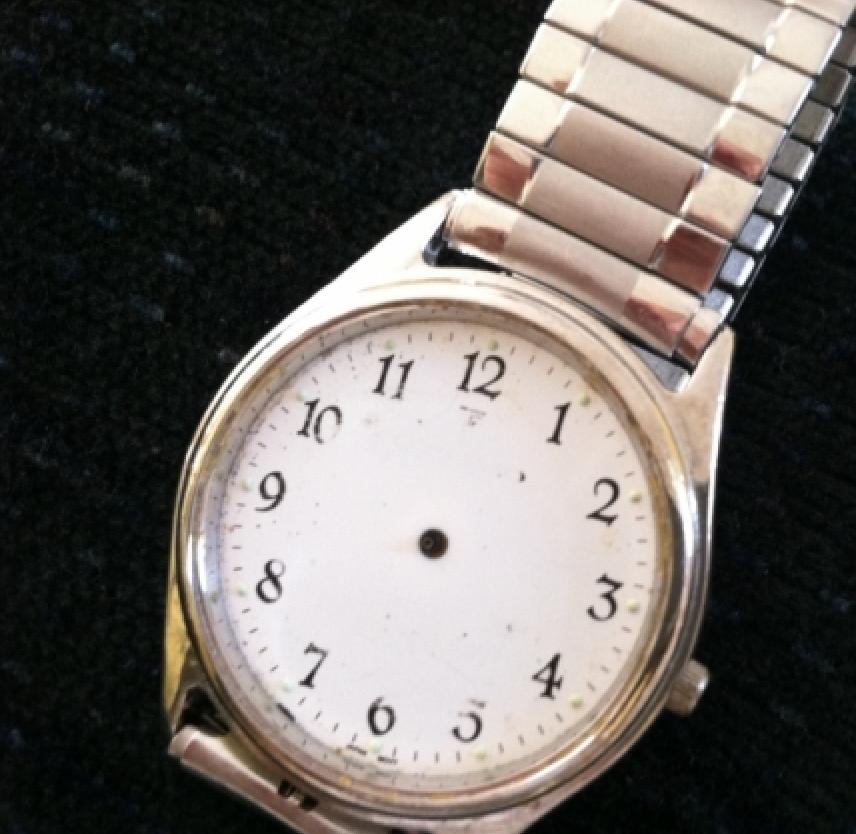 I kept it in a drawer in the antique desk in my office, and for some odd reason, I never threw it away, even though it was broken and didn’t work. It was my father’s wristwatch — a wide silver band with a large white face. It fit me perfectly. I’d slip it on my own wrist from time to time, knowing this watch once ticked along with the beat of Dad’s heart. Wearing it made me feel close to him again; it had pulsed along touching his skin, and I could picture him checking the time throughout each day.

My mother and father moved from New York to Virginia three years after my husband’s severe traumatic brain injury. I was just easing my way into normal when I got the phone call. My father had signs of dementia and Mom wanted to be near family. She also knew I understood brain disorders and this could be a help.

My father had always been a gregarious, happy man. As a music teacher, he lightened every situation with a song, and even with his dementia, he never forgot how to play the piano. But dementia sometimes causes periods of agitation, and during those periods, he would pull things apart. During one of these episodes, he disassembled his watch, yet he still insisted on wearing it. “I always wore it this way,” he said with a wink. Quirky, just like Hugh’s TBI, I thought.

Dad lived as comfortably as we could make him for the two years he suffered from vascular dementia, and when he passed away, I found his broken watch tucked in a corner of his nightstand. He had pulled off the glass face and ripped out the watch hands, but I slipped it in my pocket.

For two years, time stood still for Dad. He made up stories to replace lost memories and kept people mesmerized with some of them, like the one he told about how he met Norman Rockwell, the painter, and Mr. Rockwell modeled all the blue eyes in his paintings after my father’s! He fell in love with my mother again every time she walked into the room, telling her how beautiful she was, and he could remember the lyrics to many of the old songs from his past, even if he forgot who we were every once in a while. Once, after my sister Pat travelled across country to visit him, he looked at the two of us and happily remarked, “You two could be sisters!”

Spending time with him was like floating in a time warp. We’d rock in white chairs in the courtyard of his assisted living place, sipping coffee or iced tea, and I could never get over how a simple warm Kaiser roll with melted butter always brought him back to long-ago Sunday morning breakfasts. Little reminders, markers of time, even where time no longer held, swayed over those days. There was nothing to do but spend long quiet moments looking at each other and the sky. Our smiles said it all. If he didn’t have dementia, he would neatly fold his napkin and tell me, “Rosie baby, you outdid yourself!” It’s what he said after every great meal, no matter how small.

Dad died five years ago, and I was going to fix his watch, but I realized this past weekend that it’s perfect just the way it is. My sisters told me I should wear it as jewelry. I find it a pleasant reminder to forget what time it is and to do what’s important instead of the next thing that needs doing. Letting time stand still every now and then is good for the soul.

When I found out my Dad was dying of cancer, I had his old World War II military watch restored and gave it to him as a gift. He had given it to me as a child when he got a new "dress" watch for work, and it had sat in a drawer for many years because I done something to break the movement. He couldn't believe I still had it. He was wearing it when he died several months later and my Mom then gave it back to me. I still wear it, although infrequently because I worry about breaking it again because of its age.

Rosemary: What a beautiful tribute to your father and a very touching story. You were blessed to be a part of a loving family with parents who adored you all. Keep up the great work on your writing.

Your portrayal of Pops and your time with him is priceless. What a gift you have to bring him to life for the world to get to know Uncle Bill. Time is a gift just as your watch is although you wont be using it to find the time or to make a deadline. Enjoy the pulse it gives you as you tend to so many looking for a connection with times gone by. This helps me understand my mom who suffers from vascular dementia, and myself who holds her broken watches not really knowing what for. YELC, Angela
Rosemary, this is a a wonderful reminder to do what is important, like spending time with family.
Rosemary , thank you for sharing such beautiful memories of your father. I lost my grandfather 5 years ago and I too have his watch . Sometimes I put it on my own wrist just like you and feel close to him. My husband's TBI was 3 years ago and sometimes I wish my "Pop" was here to give me one of his big bear hugs and tell me everything is going to be ok.