Explosions and Blast Injuries: A Primer for Clinicians

U.S. Department of Health and Human Services and the Centers for Disease Control and Prevention 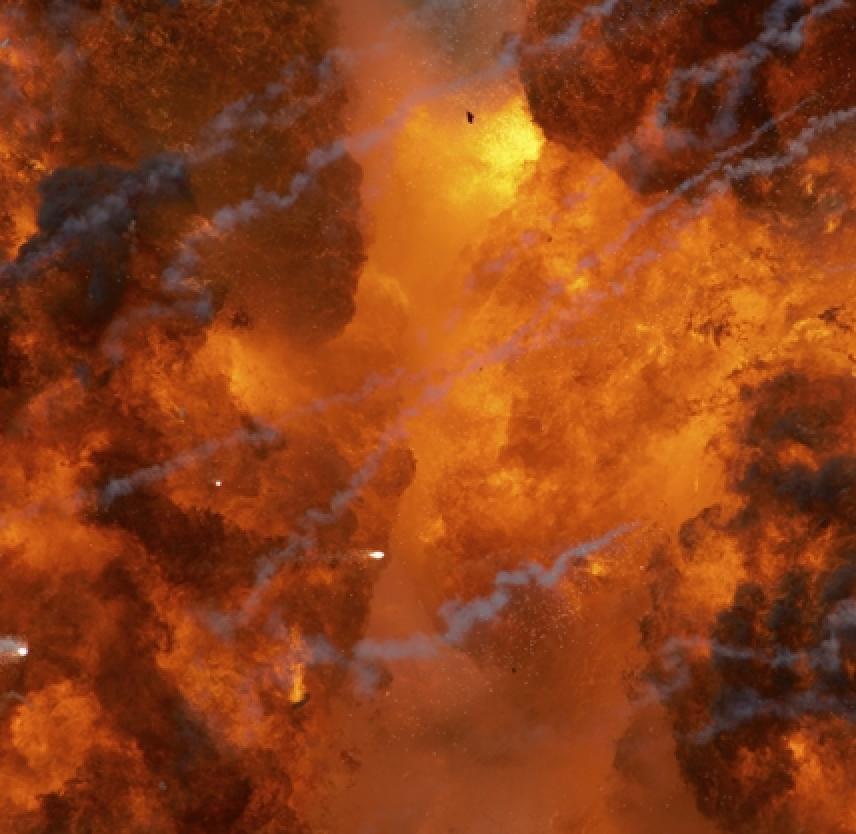 Related Content:
Blast Injury Basics: A Primer for the Medical Speech-Language Pathologist
Understanding the Effects of Concussion, Blast, and Brain Injuries: A Guide for Families, Veterans, and Caregivers
Beyond the Invisible: Living with Brain Injury
Battlemind: Traumatic Brain Injury & PTSD
Who's Helping Our Wounded Vets?

As the risk of terrorist attacks increases in the US, disaster response personnel must understand the unique pathophysiology of injuries associated with explosions and must be prepared to assess and treat the people injured by them.

Explosions can produce unique patterns of injury seldom seen outside combat. When they do occur, they have the potential to inflict multi-system life-threatening injuries on many persons simultaneously. The injury patterns following such events are a product of the composition and amount of the materials involved, the surrounding environment, delivery method (if a bomb), the distance between the victim and the blast, and any intervening protective barriers or environmental hazards. Because explosions are relatively infrequent, blast-related injuries can present unique triage, diagnostic, and management challenges to providers of emergency care.

Few U.S. health professionals have experience with explosive-related injuries. Vietnam-era physicians are retiring, other armed conflicts have been short-lived, and until this past decade, the U.S. was largely spared of the scourge of mega-terrorist attacks. This primer introduces information relevant to the care of casualties from explosives and blast injuries.

Explosives are categorized as high-order explosives (HE) or low-order explosives (LE). HE produce a defining supersonic over-pressurization shock wave. Examples of HE include TNT, C-4, Semtex, nitroglycerin, dynamite, and ammonium nitrate fuel oil (ANFO). LE create a subsonic explosion and lack HE’s over-pressurization wave. Examples of LE include pipe bombs, gunpowder, and most pure petroleum-based bombs such as Molotov cocktails or aircraft improvised as guided missiles. HE and LE cause different injury patterns.

Explosive and incendiary (fire) bombs are further characterized based on their source. “Manufactured” implies standard military-issued, mass produced, and quality-tested weapons. “Improvised” describes weapons produced in small quantities, or use of a device outside its intended purpose, such as converting a commercial aircraft into a guided missile. Manufactured (military) explosive weapons are exclusively HE-based. Terrorists will use whatever is available – illegally obtained manufactured weapons or improvised explosive devices (also known as “IEDs”) that may be composed of HE, LE, or both. Manufactured and improvised bombs cause markedly different injuries.

The four basic mechanisms of blast injury are termed as primary, secondary, tertiary, and quaternary (Table 1). “Blast Wave” (primary) refers to the intense over-pressurization impulse created by a detonated HE. Blast injuries are characterized by anatomical and physiological changes from the direct or reflective over-pressurization force impacting the body’s surface. The HE “blast wave” (over-pressure component) should be distinguished from “blast wind” (forced super-heated air flow). The latter may be encountered with both HE and LE.

LE are classified differently because they lack the self-defining HE over-pressurization wave. LE’s mechanisms of injuries are characterized as due from ballistics (fragmentation), blast wind (not blast wave), and thermal. There is some overlap between LE descriptive mechanisms and HE’s Secondary, Tertiary, and Quaternary mechanisms.

Note: Up to 10% of all blast survivors have significant eye injuries. These injuries involve perforations from high-velocity projectiles, can occur with minimal initial discomfort, and present for care days, weeks, or months after the event. Symptoms include eye pain or irritation, foreign body sensation, altered vision, periorbital swelling or contusions. Findings can include decreased visual acuity, hyphema, globe perforation, subconjunctival hemorrhage, foreign body, or lid lacerations. Liberal referral for ophthalmologic screening is encouraged.

This Explosives Primer was developed from published and unpublished sources. If quoted, please cite date and time as changes will be made as new information becomes available or is cleared for public distribution. From the U.S. Department of Health and Human Services and the Centers for Disease Control and Prevention, 2006.

How do I donate my brain? During my tour in Afghanistan in 2009 I was involved in four explosions; one low order in my vehicle, two high order and one low order when I was neutralizing an IED. I figure when I die (hopefully in old age) my brain may be of interest to you.
If you care to scan it now while I'm alive have at it!

Thank you! I'll do so right away!

Thank you so much for asking! You can find out more about the importance of brain donation here or since you are a veteran, you can sign up at Project Enlist.

My Captain and I were under our 8 inch Howitzer in Graffenvohr Germany in 1971, got off on the wrong trail, weapon discharged, we were both knocked out, medics said they brought me around after 3 Ammonia capsules, don’t remember that, the said they asked me if I knew where I was, they said, I said New Jersey, said they also asked “what is your rank” they said I responded: Rank? I came to in a tent, holding a cold cup of coffee about 4 hours after the said they brought me from the jeep; My personality changed, was outgoing and gregarious, after that I was very different, Sweated under the arms very profusely even through a field jacket into my trousers; This is a very true statement, hope it helps someone in the future